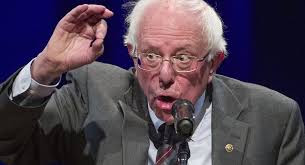 I did not support Bernie Sanders last time, and will not again, even though I might positively check most of his policy boxes.

I gave him another chance while watching his CNN “town hall” but had to leave after a few minutes when I realized what a horrible candidate he is. He is unlistenable-to with a whiny Brooklyn accent; lengthy explications when a bumper-sticker-answer might convince, God forbid, excite someone; condescension and utter lack of genuineness. He is the most unlikeable politician I have ever encountered.

Today, I read this, and now believe he is a useless, horrible, specimen of a human being, as well -- Trumpian, by way of despising a free press and possessing not an ounce of humility or humor. He is a nightmare because, like Trump, he attracts politically brainless political neophytes. But unlike Trump, his voters have demonstrated they would rather lose the presidency than exhibit any common sense.

Since it is unlikely that either the House or Senate would become Democratic Socialist after a Sanders victory, try to imagine him managing the daily push-and-pull of events.