What We Can Know 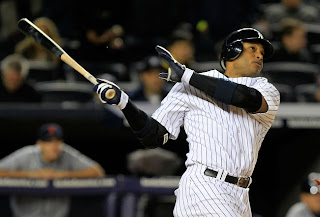 “Everything happens for a reason.”

If it weren’t such an odious cliché, the thought should be applauded as the highest form of Enlightenment thinking. However, the Age of Reason occurred about 400 years ago and has been replaced by an emphasis on the mystical and divine (which is why Rick Perry may be president in 2013 and not Barack Obama.)

Yesterday, New York Yankee Robinson Cano explained his prodigious output of six runs batted in a playoff game by saying, “Everything happens for a reason.”

The reason apparently is that Friday night’s game was suspended by rain, so it had to be resumed on Saturday.

I tossed and turned last night trying to examine what Cano meant. Did it mean the rain delay caused him to improve his swing? Did it mean that God had planned for him to win the game all along and that the delay was only incidental? Did the gods of baseball, or of Reason, make it rain Friday night and stop long enough for him to become – God, I hate to say it – a hero?

I happen to agree that all things happen for a reason, though we don’t always know what that reason is. Every action of every animate object on Earth is caused by some other action and has consequences for the future. But I don’t think Mr. Cano can know what the hell he was saying. He’s just another stupid athlete saying the same things all stupid athletes have said when a microphone held by a stupid TV reporter is shoved in their faces.
Posted by Ira