The “mute” button will be my favorite and most used device of the day because TV today, especially the football portion of the schedule, will be dripping with inappropriate, if not fake, patriotic gestures staged by this generation’s Joseph Goebbelses -- reborn as Roger Ailes and Karl Rove.

I do plan to watch football and check the news at the appointed hours to see if there is anything I need to know.

What I don’t need to know is what a zillion talking heads think about 9/11 or what the anniversary means. What I did need to know, I got early in the day from a documentary run on all the History Channels, consisting of raw footage of that morning 10 years ago. No narration, just an assemblage of contemporaneously live home video, with a minimum of TV news blather.

The universal instantaneous reaction seemed to be that no one knew what was happening. They seemed to know why (Arab terrorism) but not what” -- which is the normal human reaction to the incomprehensible. Yet 10 years later the United States still does not know what to do. The morning paper carries the impossible-to-believe news that the Obama administration is about to sign a pact with Turkey for the basing of American drones – the purpose being for the Turks to crush the Kurdish minority, who a few short years ago we were defending from the predations of Saddam Hussein.

We still think Pakistan is our friend, and we still think we can make Afghanistan a democracy. On foreign policy and national security issues, a president of color with a Muslim name is no better than the playboy prince he succeeded. 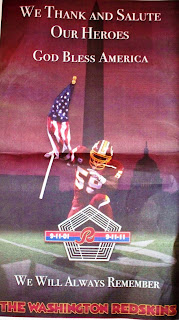 The aforementioned morning newspaper sports section carried a full page (thus, expensive) ad from the devil himself, Redskins owner Dan Snyder, depicting a Redskin charging across the national Mall carrying an American flag like the upraised sword of a crusader. The page tells us that the Redskins “thank and salute our heroes” and that the Redskins “will always remember.” Did I mention that it also says “God Bless America?”

One more reason I hope the Redskins lose every game they every play under the ownership of this monstrous height-challenged ninny who, it was reported elsewhere in the section, was under the influence of alcohol when he decided to hire the current coach.

We each have our own remembrance of and meaning for 9/11/01, and no one’s is any more valid than another’s. One thing that is a lie, however, is that “nothing would ever be the same.”

It won’t be the same for families and friends of the dead, but for the rest of us, life (except for airport security) is pretty much the same as ever. Football on Sundays (Mondays and Thursdays as well as Friday nights and Saturday afternoons), a warlike national mentality guided by a foreign policy that dooms this country to slow demise and the unwillingness of enough young people to enlist and carry it out.

The only area of national life that has changed was that George W. Bush’s prosecution of two misconceived wars, George W. Bush’s tax cuts for the rich and George W. Bush’s stewardship of the mortgage bust made this generation and the next one poorer than the ones that preceded it.

Watching the raw footage of what happened 10 years ago today can certainly inspire hatred and wishes for revenge, and I am as hateful and vengeance-minded as the next

American. But those twin towers of viscera should be directed at Pakistan, Saudi Arabia and every other Islamic government that harbors terrorists. We know who they are, and so do they.

So spare me the crock of “heroes” and “unity” and “God.” No “hero” sacrificed his or her life to protect my freedom. If God had truly blessed America, it means He has damned everyone else. We have not been this disunited as a nation since the Civil War. Because of 9/11, I have less freedom today than I did 10 years because while we were weakened as a nation, it was more a result of our own government’s reaction to it than by the precipitating act itself.