This is the halfway mark of the 2013 baseball season, and it is pretty depressing for the Nationals. Last year, they won more games than any other team in the regular season through luck and weak opposition plus a couple of guys on offense having career years. 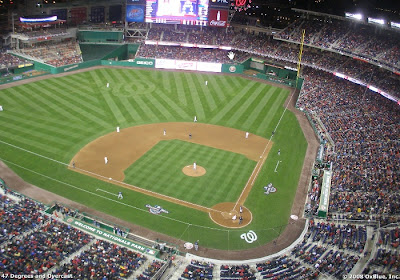 Management’s failure to recognize the thin margin between luck and success resulted in Stephen Strasburg sitting on the bench when they could have used him most, and karma suggests the Nats will not any time soon come as close to glory as they did last year.

I think it was basketball guru Phil Jackson who said, “You are what your record says you are.” For about six weeks, the Nats have been dogpaddling around the .500 mark, meaning they are the mediocrity that direct observation confirms they are. Since fish stink from the head, Davey Johnson’s retirement cannot come too soon. Unfortunately, his continued presence will doom the Nats to underperformance the rest of the year.

Who knows how many games the Nats might have won in the first half had the clown in the outfield had even the brains of a scarecrow. But, no, Bryce Harper has no regard for outfield walls, his own body or the opinion of veteran players and his own management. He may come back strong, in terms of batting and fielding, but stupid is forever, and the question is how many games he will cost versus how many he will help win.

As for the rest:

Denard Span – terrific centerfielder, needs to hit for higher average.
Anthony Rendon – Fantastic, for a guy with a mullet
Ryan Zimmerman – Over the hill. Good for some clutch hitting, but every ground ball hit in his direction is an adventure. He needs to move to first base, but he can’t because idiot management signed Adam LaRoche for too much money to play the position.
Adam LaRoche – Too much of a streak hitter to be counted on. Can play the hell out of first base, but good fielders are a dime a dozen. He is too caught up in the beauty of his swing to be as productive at the plate as he should be. If you haven’t seen that beauteous swing, watch his next strikeout.
Jayson Werth – One of the worst free-agent signings in history, and we are stuck with him for several more years. At best, he is a No. 6 hitter. Can’t play the outfield at a major league level and lately has been playing injured, which simply means he is giving away runs and not scoring runs.
Ian Desmond – the best player on the team.
Kurt Suzuki – For someone with such a low batting average, he tends to keep rallies going at critical times and is a damn good defensive catcher. He should be batting seventh, instead of eighth, so that he won’t be pitched around.
Steve Lombardozzi – Destined to be a utility player, and the more he plays, the less utility he has.
Danny Espinosa– An argument can be made with statistics that he is the worst hitter in the Major Leagues, except he is no longer in the majors, thank God. But that he was here for so long is further proof of Davey Johnson’s malfeasance.
Roger Bernadina –A fan favorite and fun guy, but after all these years, the most senior member of the franchise, going back to Montreal, has yet to show he can hit. Use him in a trade with a contender that needs late-inning defensive help.
Chad Tracy – A godawful waste of bench space, but he is a “gamer”  and gets his uniform dirty, whatever that means. It would be nice if he could hit.  Unfortunately for him, when Davey retires, his own career may be over.
Tyler Moore – I nickname him “Mary” for obvious reasons (and Harper, “Valerie”), and he may one day became an average Major Leaguer. In the meantime he is ideal trade bait for a decent starting pitcher.
Wilson Ramos – One day he may no longer be injured, but this namesake of a volleyball has not been useful for years. To paraphrase Casey Stengel, "He's 25. In 10 years he has a good chance of being 35."

Stephen Strasburg – A thoroughbred, capable of strong, breathtaking performances, but also as fragile physically and mentally as a prize racehorse.
Gio Gonzalez – Entertaining and good, but has to stop visibly reacting to setbacks during a game. Batters take advantage of every pitcher who shows emotion, and Gio does a great Pagliacci every time he goes out there.
Jordan Zimmermann – What Strasburg ought to be. The best starter in the league, in both talent and mental makeup.
Ross Detwiler – Likeable and has tremendous potential, but big league hitters can hit any fastball, and he throws his about 95 percent of the time. Like Richard Wagner, “his music is better than it sounds.”
Ross Ohlendorf – Great pickup for long relief or spot starting. A Princetonian who was an intern at the Ag Department. I am afraid, however, that the Nats – with Princeton, Stanford, Berkeley, Virginia and Rice represented on the roster – will prove the Crash Davis warning: “Don’t think. You’re only hurting the team.”
Dan Haren – Human garbage who everyone but General Manager Frank Rizzo knew was three years into his over-the-hill act.
Taylor Jordan – Not bad in his one start so far. Unfortunately Ryan Zimmerman played in that game, for which Jordan was accorded the loss.
Tyler Clippard – His numbers look good (his glasses don’t), but I have never trusted him in critical situations. He is better suited to starting or long relief.
Drew Storen – A Dolly Parton-sized bust since he personally lost the playoffs last year. His meltdown stayed with him all winter and half this season, and apparently he is pouting because he lost the role of closer and complains that he doesn’t have the adrenaline rush for being a set-up man. Keep him around, but on a short leash.
Fernando Abad – Can’t complain so far, except he has been released or traded by a number of really bad teams in the past. Hence his last name.
Craig Stammen – Overlooked but possibly the best pitcher in the bullpen.
Ian Krol – New guy who looks like the real thing.
Erik Davis -- Too early to tell, but he has an uncanny resemblance to Tyler Clippard. Which is not good.
Rafael Soriano – The numbers are there in terms of saves, which is the only real metric for a closer. But he does it ugly, and soon will blow a bunch of games. Expensive, but only for a year, I hope.