I Say It's Spinach and to Hell With It!!

The title of this post comes from a 1928 E.B. White cartoon in The New Yorker, and it occurred to me as the result of my outrage at that magazine.

I never pretended to have an appreciation for art or anything visual, for that matter.

But the esteemed magazine has been running a cartoon caption contest for a couple of years, and I do have an appreciation for choosing between the right word and just the right word -- the difference, according to Mark Twain, between "lightning" and "lightning bug."

For months, I looked at the contest, shook my head and moved on. A few weeks ago, however, the right caption leaped into my head and I entered. The cartoon is shown below: 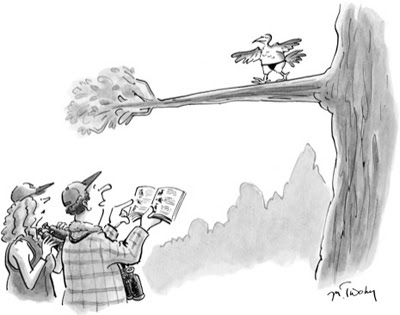 My caption was: "It's the North American preening thongbird."

What was the winning entry, submitted by one Sandy Sommer of St. Louis? The humdrum yuk yuk: "It's a thongbird."

What I know about humor is this. To rise above the mundane, a gag can't go directly from setup to punchline. Otherwise it is a "knock knock" joke or a mere pun. A good gag needs a third, external, element. In this case that element is "North American preening."

Disagree with me if you will about that, and I certainly disagree with the reputation of The New Yorker. You may call it the finest collection of contemporary literature and humor in the world, but I say it's spinach, and to hell with it.
Posted by Ira