You Gotta Have Heart

Long before “Bull Durham,” “The Natural” and “Field of Dreams,” the spiritual nature of baseball was confirmed by the musical “Damn Yankees.” It was about a perennially dyspeptic fan of the Washington Senators who sells his soul to the devil to become the young hero who leads a laughably miserable team toward overtaking the hated New York Yankees.

The one song most people know from that score is “You Gotta Have Heart.” Well, as a lifelong fan of the old Washington Senators (1901-1960), the “new” Washington Senators (1961-1971) and now the Washington Nationals (2005), I can tell you heart is all you have. Because while the Cubs haven’t been in a World Series since 1945, no team from has been there since 1933. And none will be there any time soon.

They played “You Gotta Have Heart” today during the sixth inning break of the last professional baseball game to be played at Robert F. Kennedy Stadium. The team moves to a new half-a-billion-dollar ballpark next year. 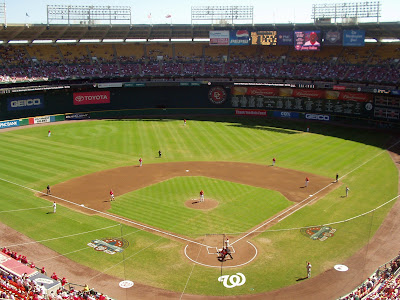 When built in 1961, as District of Columbia Stadium, it was the ne plus ultra of sports architecture – the first cantilevered stadium, without posts to support the upper deck; the first of the round multipurpose stadiums built for baseball, football and concerts; and the first with moveable sections for reconfiguring for baseball, football, music or soccer – which meant metal flooring, which meant the memorable sight and feel of a stadium literally rocking under the stomping of fans. Now RFK is aging and has none of the amenities fans – and billionaire owners – need.

There was another song from “Damn Yankees” that came to mind: “Goodbye, Old Girl,” as the middle aged couch potato sings about his wife as he leaves his house with Ray Walston, as the devil, to transmogrify into Joe Hardy, “Shoeless Joe from Hannibal, Mo.”

I wasn’t saying goodbye to the Mussolini-inspired bowl of concrete ramps, or the men’s rooms with the ambience of a Turkish dungeon or the quality of baseball played there (most kindly described as suboptimal). I was saying goodbye to a new friend that replaced the Griffith Stadium of my youth and who turned out after 46 years to be an old friend. I wasn’t saying goodbye; I was paying respect to the personal memories associated with its existence.

I attended one of the first football games there in 1961, when the Redskins beat the Cowboys in a fog that rendered the action from the upper deck a series of rumors.

I attended the first baseball game played there in 1962, when John F. Kennedy made the ceremonial first pitch and the first home run was hit by a Senator named Johnson. Later that year, another John Kennedy, a utility infielder, homered in his first Major League at bat.

I was there for the 1969 All-Star Game, featuring Mays, Clemente, Bench, Rose, and Gibson.

I was there on April 29, 1962, with my dad in box seats to watch a doubleheader loss to the Yankees not knowing my best friend had been killed the night before in a car crash caused by police chasing a drunk driver. And I was there 36 times this year, almost always with my wife, daughter or son. And I was there today, September 23, 2007, for the last game, with my son, the namesake of that friend I lost at 14.

So I did have a few “moments” before, during and after the victory over the Philadelphia Phillies. And they are still hard to put into the right words. Whatever baseball is, it is less about the beauty of the game than the fact it has remained essentially the same for about 130 years and is imbued with family tradition and values like no other religion I know.