Where to start? I could begin by saying, “I told you so,” but that would be un-Christian. Oh, that’s right, I’m not Christian. But what I have said most of this season about the rancid baseball mentality that finally infected the Nats’ brains and hearts was proved mostly right. They cower, they wilt, they don’t think and, maybe worst of all believe that their manager is as smart as he says he is. (98 wins doesn't mean anything when the opponents are playing possum or having bad years.) 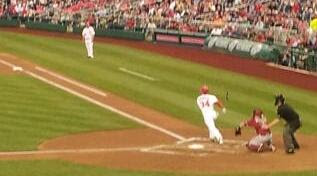 Davey Johnson, for all his baseball wisdom, has a .500 record in post-season win-or-go-home games. He blew the Orioles chance to go to the World Series in 1997 by somehow losing an 11-inning 1-0 game because he doesn’t like to play “small ball.” He has lost games this year and lost the NLDS series by in-game tactical blunders that befuddle fans, sportswriters and opponents alike.


Johnson’s biggest problem is that he is what is known as “a player’s manager.” They all love him. He lets starting pitchers stay in beyond their “pull date” so they can get a “win,” regardless of the loss that doing so will ensure. He “liked” EdLose Johnson in the final game of the NLDS, and where did it get him? Anyone who has watched Tyler Clippard the last month or two knows that you would rather have Tyler Perry on the mound. And Storen, as blameless as he usually is, could not deal with bad calls by umps and, by one viewer’s account (I was at the game so couldn’t see) was visibly shaking on the mound. And he had a daily hunch that Espinosa could hit.


All we heard after the regular season from Johnson and his players was, “we don’t have to do anything different in post-season. Just play like we know how.” On the one hand, they did – they played stupid, cowardly baseball, trying to avoid losing instead of trying to win.  On the other hand, one might think that since you are playing the defending world champions, most of whom were on the team last year, maybe you do play a little differently.


I read of a Nats apologist who says of the nightmare on Half Street,  nobody feels worse than Storen. Excuse me. He makes however many millions he makes and gets to try again every one of the next 15-20 years. I, as an aging fan, pay him and his teammates, so I feel worse – I can’t affect the outcome, my enjoyment is ruined, and I am many thousands of dollars poorer.


Then there is the Strasburg situation, which I have heard no one defend except for the most diehard sycophants of GM Mike Rizzo. The arguments are clear: either shut him down so he has a longer brighter future or play him now so that you improve the chances of winning it all, given that the Nats might never again come this close. Obviously, I am on the side of the latter, but the opposing view is that management was correct in shutting him down because his last few outings were poor. I say, so what?  Some of Clippard’s, Jackson’s, Zimmermann’s and Gonzalez’s recent outings sucked but they were allowed to play. Honstly, fans, did you want EdLose Jackson on the mound in the 7th inning or Strasburg? Or Jackson starting in place of Strasburg.  If Strasburg were not shut down, and he pitched badly, genius Davey could have taken him out. Quite simple, really.


But this team is not run by Davey, Rizzo or even anybody named Lerner. It is run by agent Scott Boras, and I am getting tired of giving that little slimeball, whom many clubs won’t even talk to, any more of my money.


The Nats made me buy my 2013 season tickets in full and in advance in order to get extra tickets to the playoffs. I should have remembered caveat emptor. I and many other fans, even as we acknowledge that baseball is an unpredictable heartbreaking sport, can justifiably claim to be victims of consumer fraud.


Now that I have claimed to be a better manager than Rizzo and Johnson, here is my assessment of the Nats roster:


Werth – I have become more of a fan of his this year, but you don’t pay $126 million for a leadoff hitter. We need a legitimate .300-hitting rabbit.


Harper – He’ll be great, but he needs a shrink first. Or a fastball to the side of his head, assuming the ball won’t disintegrate. He also needs to hit better than .130 when the pressure is on.


Zimmerman – He is not a reliable third baseman anymore. Move him to first.


LaRoche – A free agent, he should be allowed to move elsewhere. He had a career year statistically, but my feeling is that he is more interested in his perfect HR swing than in actually moving runners along. LaRoche plays 1B well, but it is not a critical defensive position unless the Venus de Milo is your only other option.


Morse – Though he’s a fan favorite, I would love to get a front-line starter and a productive leadoff man for him in trade. (Or at least put him at first in place of a departed LaRoche.) Morse is a defensive liability in the outfield and a streak hitter. You don’t have to hit 450-foot home runs. Usually, a 350-foot HR scores the name number of runs. He is also a former juicer, and I don’t like people like that.


Desmond – I have become a fan of his, too, after a couple of crappy years. He is a five-tool player and a keeper.


Espinosa – A stinkeroo. OK, some sparkling infielders with occasional pop don’t always hit, but he never hits. He is a switch-hitter who is terrible against right handed pitching. Most pitchers are right handed. He led the league in strikeouts, which are the least (zero) productive kind of outs and he simply cannot adjust to big league pitching. Get him away from here! Lombardozzi can play and hit.


Suzuki – A good pickup. Make Ramos earn his job back and get rid of Flores. Neither of them can actually block pitches in the dirt, however.


Bernadina – The guy deserves a shot at starting, in place of Morse if Morse were to leave.


Tyler Moore – Play him every day at first, in place of LaRoche. Besides, he turns the world on with his smile.


Tracy and DeRosa – Good bye. We don’t need mediocre veteran “clubhouse” guys who exist because they are white and getting older, which is to say they are just like managers, which they may one day become.


Bullpen – Fumigate it. Keep Storen, develop a late-inning guy from AA or AAA. Release or trade Clippard (a failed starter before he became a failed reliever.) Stammen and Burnett are fine for now, but I just don’t think they are reliable for more than an inning at a time. Mattheus has some promise. Do not let Henry Rodriguez anywhere near Washington, D.C. Put Wang on a slow boat. I don’t care about Mike Gonzalez, but he is a lefty.


Davey Johnson – Thanks for stepping in, but you were given it all and pissed it away. Now go back to the front office.