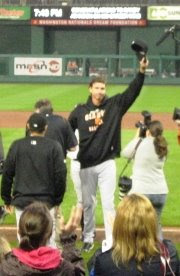 Today's rain was a mere downpour, sporadic enough to allow Randy Johnson to cop his historic career win No. 300. Congratulations, your surliness.

It would not have happened but for the home plate umpire, who may have been a Supreme Court clerk during Bush v. Gore, when an election was corrupted by activist Republicans who claim that they are merely umpires calling them as they see them.

The difference between Randy Johnson winning and losing on Thursday, was a called strike three with the bases loaded and a 3-2 count with Washington's top power hitter, Adam Dunn, at the plate.

One of the pitchers who replaced Johnson and whose job it was to keep Washington from scoring, and thus denying history, pitched ball four, to force home a Nationals run, tie the game and wipe out Johnson's chance of winning. Dunn started trotting to first base, the runner on third starting strolling home.

Except the home plate umpire finally decided otherwise; he called it strike three to end the inning and preserve Johnson's lead. I happened to be sitting about as close to the batter as is possible from the stands. The ball was lower than than Dick Cheney's morals. So much for impartiality.

Speaking of baseball and justice, the Giants' second baseman calls to mind a potential blockbuster of a case in the Illinois courts. The S.F. infielder is named Emmanuel Burriss.
Posted by Ira