D.C. has a lot of history, and Wednesday night, there was a chance that history would be made on a professional baseball field for the first time since Walter Johnson won the last game of the 1924 World Series.

San Francisco pitcher Randy Johnson was to pitch against the Washington Nationals in pursuit of his 300th career win--a remarkable feat in itself and truly historic because the way the game is now played, I can guarantee you that no one will win 300 again.

The game was not played due, officially, to "unplayable field conditions," a ruse the umpires used to override Nationals management, which has the right to determine when a game starts if weather threatens. It took the team, the umpires, and probably the players' union almost four hours to determine there would be no game. The Nationals desperately wanted the game played because though it is worst team in the major leagues in wins and in attendance, the gate would have been remunerative. So management let the fans stick around long enough to drink all the beer and eat all the hot dogs the concessionnaires had.

The result, no doubt due to the players' union, which has the right to weigh in on scheduling in a case where San Francisco was not scheduled to return to this city this year. The players didn't want to play a split day/night doubleheader Thursday, starting at 1 o'clock, after waiting around tonight till past 11. The Giants didn't want to have to leave town late Thursday after an evening game. So Thursday will see a rarity -- a "traditional doubleheader" -- two game for the price of one, starting at 4:30. Nats management, liberal Democrats politically but Republican in rapacity, screwed everyone who walked up to the park to buy a ticket to see Randy Johnson. Their tickets are good for some other game. Those with tickets for Thursday's game get to see Johnson, plus the Nats get moolah from other suckers who walk up on Thursday to see history being made.

Now, the weather! Any time you see umpires emerge to inspect the field conditions after three hours of biblical deluges and using umbrellas; any time the hair-raising thundercrack resounded simultaneously with the lightning bolt; any time you see stadium personnel leaving two-by-two, you know the game will not be played. Thousands, maybe tens of thousands, knew there would be no game. Usually, if rain has not subsided two hours past the scheduled start, the game is postponed. Tonight, the 7:05 game was not called unti 10:50.

It is past midnight and I am still soaked, from my good watch, which has fog between its face and cover, to the dollar bills in my pocket, to my socks. It isn't because I didn't plan ahead.

As usual, I was to meet my son, coming from another direction, outside an admission gate a few minutes before game time, which is about when it started to pour. I ducked under a metal roof just outside the turnstiles, with an umbrella. The rain began coming at me horizontally. Then I squeezed further under cover but still outside the turnstiles, and the tornadic winds shifted and blew rain and hail sideways to drench my other side. Then, all the water in the upper deck gushed through a crack in the concret, soaking me from shirt collar to short hairs. I think I saw frogs. Speaking of which ...

here is what the field looked like after three and a half hours of torrential rain. I thought I detected a French Airbus out there somewhere.

Baseball fever -- catch it and die! 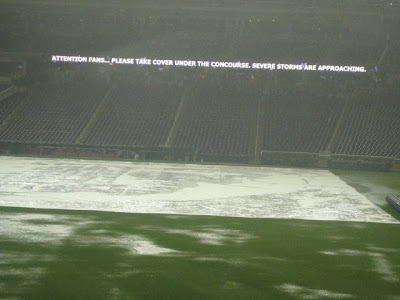