We are just starting to clear out the attic after the HVAC people rearranged all our mementos into a pyramid of frayed, moth-eaten, bookworm-munched nostalgia, which so happened to bury our suitcases right before we needed them last weekend.

De-junking an attic is going to be a slow and painful process, but it has the potential for amusement, such as this photo taken around 1970 when the University of Maryland was a military occupation zone after some harmless protests of the bombing of Cambodia. 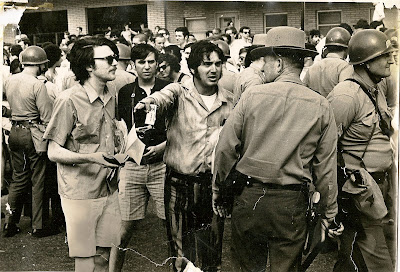 It is hard to believe I was that skinny (that is me on the left, of course) but it may also be harder to believe I was not a student protester there, nor even a student journalist. To the best of my recollection -- which is none to good for anything after 1971 -- I may actually have been reporting for UPI at the time. Must have been casual Friday.

By the way, the guy doing the negotiating and possibly saving my life, was a college newspaper colleague who knew cop-talk, having served as an MP during the U.S. invasion of the Dominican Republic, which made America safe for shortstops. 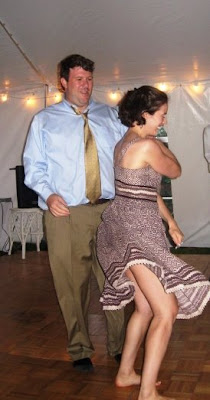 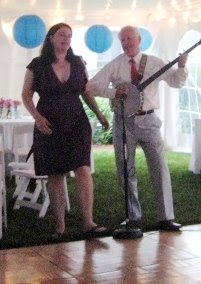 The younger Allen writer has a new blog on the cqpolitics.com site, where he comments on politics in quite a different tone than commentary you might find here.

The younger Allen writer's better half is now the communications director for her second senator.

The young Allen lawyer may go on the road.

Nationals Park has just seen its two largest crowds ever, and it's a disgusting sight. The only way this new ballpark can can draw a crowd is if the visiting team comes from Philadelphia, New York and, now Boston.

Philly and New York Mets fans at least have passion. These Red Sox fans are a bunch of whiny, front-running stooges -- the wine and cheese crowd who don't know a damn thing about baseball but think it's cooler to root for the Red Sox than for the Cubs, whose "nation" of fans is made up largely of wannabes. Where do they come from? I guess some die-hards take vacation to see teams they can't afford to see at home, but mostly these are Washingtonians who either once lived within 200 miles of the Phillies, Mets, Red Sox or Cubs or has a third-cousin who actually grew up with those teams.

The real fans get drunk, volubly offer advice to their own manager or the umpires or cheer for well-executed sacrifice bunts. The phony phans chant "Let's go (Red Sox/Mets/Phillies/Cubs" only when their team is ahead. Not like true fans who try to spark rallies by chanting when their team is behind.

The home team, the Nationals, two of whom once appeared during a game in uniforms spelled "Natinals," stink like a New York City garbagemen's strike. They are on track to compile the worst record in modern history. What they lack in talent, they really lack in ownership, upper management, field management and intelligence.

This photo should be their logo. (For nonfans, note that the ball is snug inside the catcher's mitt.) 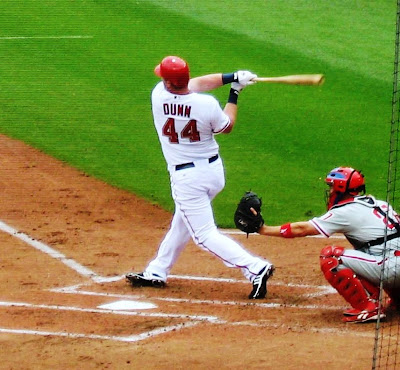