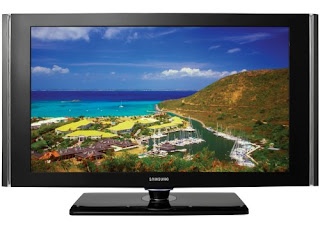 Very High Definitions
Almost 29 years ago we were fortunate to have a daughter who would grow up to get As in school, a law degree and many friends. But we value her most for a stray engineering gene that enables her to figure out logistical problems that I could never in a million years solve. Like how to move an older 150-pound TV off its stand safely and slide it to an out of the way area pending permanent relocation, open, safely lift (with my help, of course) and set up a new digital high-definition TV. And make the remote work!

Thank you, Amanda. (She also figured out I was in the wrong garage the night before when I phoned her to say I would be delayed in getting the car after “West Side Story” because I was stuck in a stairwell whose doors locked from the outside. When I finally zoomed the car up the narrow ramps, I apparently narrowly missed running over the substitute Tony!)

So, we have this new digital HD TV that is way cool. At 40 inches, it already seems small, but the best part is not the picture clarity but the fact that sports events and dramas shot in HD actually show you three dimensions. That is, the depth perception is realistic enough so that on the NCIS reruns that are constantly on the air in certain portions of our house, Mark Harmon actually looks his age and the interior scenes look like they are soap-opera live.

So, put me down as a big fan of HDTV. Get one. Get two or three! With the way the economy is going, they are only going to get cheaper and we will have nothing to do with our lives besides watch TV. Thus, it is better to see good than to feel good.

Break a Leg
My wife and I have a long-running argument/joke about which is better – a baseball game or a Broadway show. I laugh. I sneer. I condescend. There have been hundreds of thousands of professional baseball games played and no one is ever like another one; we have seen things happen that were totally unexpected, history-making and memorable (like 10 pitchers used by one team in a game, like Cal Ripken NOT starting a game, like a game being lost by a runner getting picked off third base, Ken Griffey Jr. breaking the outfield wall by crashing into it.)

Because baseball has no time limit, her routine question of “when will we back” is self-answering: “With any luck, never!” As I routinely point out when I have some breath to waste, a play is scripted and it always has the same ending as it did the night before. Therefore, all you can hope for by going to a play, the price of which these days is indistinguishable on the ticket stub from the starting time, is to enjoy a work you already know or to see an understudy hit it big.

The other week, I decided on the spur of the moment, “Let’s go see a show.” The show is “West Side Story,” a pre-Broadway run here in D.C. written and directed, if you can believe it, by Arthur Laurents. Mr. Laurents also wrote the original version staged in 1957. He is one old dramaturgist!

To his credit, he has revised the Romeo/Juliet, Jets/Sharks motif to be more favorable to the Sharks, brought in a showstopping 21-year-old opera singer from Argentine to bring down the house as Maria and offered us gang members who actually are young (a couple in their teens) and who play their angst as kids, not overgrown chorus boys.

In the first scene, containing “The Jets Song,” one of the “yoots” was hit pretty hard in the gut by Officer Krupke’s nightstick. The scene ended, the lights went down and in a second or two a figure stumbled silently and athletically from the wings, plopped to the floor clutching his midsection. I assumed it was the beginning of the next scene, opening on the kid who got belted.

But when two stage hands came running to his aid and the figure said (though I did not hear it), “I need help,” I figured something was up. The curtain went down, the lights came up and after a moment or two a call went out for a doctor in the house. As usual at these prices, there was no shortage of medical help, though I don’t know whether they were all podiatrists, plastic surgeons or even “play doctors.”

We had assumed during the 30-minute stoppage that a crew member might have had a heart attack and rushing to the stage was a way of making sure he got help, instead of collapsing anonymously in the wings and tripping someone else. Then, brilliant Amanda figure it out, a few minutes before the announcement came that it was Tony who was injured during the scene change, which occurred before his first appearance in the play.

When the play resumed, the standby (not “understudy”) went on in Tony’s place and had the audience in the palm of his hand. For my taste, he was too Doogie Howserish to be an effective Tony, but he knew all the words and all the dances. As I mentioned, Maria was out of this world, and Anita pretty much set the stage on fire, too.

I thought after the first scene I would not like it because, like everyone else, I know the movie version pretty well. But as it went on, I became enamored of the stage version, particularly this one. This is much more raw, tense and bawdy than the 1961 movie, and the dancing, right in front of you with performers actually out of breath by the end and in ever-present danger of ripping their pants or falling from a two-story landing, is riveting.

This version had the added attraction/distraction of having whole musical numbers and a couple of scenes entirely in Spanish when only the Sharks were on stage. It was not advertised as such, and I didn’t lose any real meaning by being unilingual, but there were no surtitles and maybe some things were lost in the translation.

Anyway, sometimes things happen at plays that you have never seen before, like big tough gangleader Tony felled by a stray prop, and if you get a chance to see it in DC or on Broadway, do so. It is timeless. (Of course it’s timeless, Ira, you moron. It was written by Shakespeare!) Just substitute the Hmong in Detroit for the Sharks and the rednecks from Appalachia for the Jets – or whichever ethnic group you want. When I saw the movie in the early 70s in Chicago, in a theater full of black kids, I was surprised at where the audience’s sympathies lay. They were rooting like hell for the Jets, I guess on the principle “better the devil you know” than the devil competing for your jobs.

Eartha “No Etta” Kitt
One of the very first movies I remember seeing was in CinemaScope, at the Uptown Theater in Washington, and had a stupid name – “New Faces.” It was the 1954 film version of Broadway’s “New Faces of 1952,” a musical review of fresh new talent, one of whom was Paul Lynde. But he wasn’t the breakthrough artist. I remember my parents couldn’t stop talking about this woman with the silly name, Eartha Kitt. 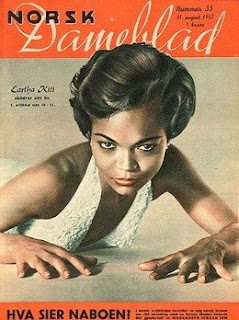 She has done many things, and I think her role as Catwoman on Batman in the 1960s may have come during the Summer of Love, so I don’t remember her doing that. But I do remember her standing up to Lady Bird Johnson about the War in Vietnam at a White House lunch, and I remember her voice and I remember finding a few years ago on the Internet her version of my own ethnic anthem, “Roumania, Roumania.” (It seems to have been taken down, probably by her lawyers.)

Just a couple of years ago, in my role as a member of the speaker’s committee, I volunteered to try to get her to speak at the highly prestigious National Press Club luncheon series. I finally got a hold of her talent agent and found out that while the Jolies, Redfords, Perlmans, Marsalises of the world go out of their way to spread their message at this event, Miss Kitt wanted an appearance fee and accommodations for her makeup artist.

Folks, this is not done. This forum is for kings, presidents, prime ministers, corporate titans, sports legends and entertainers who either entertain a little or push a worthy cause.

So, while Eartha Kitt was multitalented and edgy, she turned out toward the end to be a money-grubbing ingrate. She didn’t need the Press Club, and when you come right down to it, we didn’t need her, either. The sad part of it was how little money she asked.
Posted by Ira