Rush to the Judgment

In response to Brian F.'s comment to my recent post "Not so sweet, Caroline," here are some thoughts about the Illinois Senate seat; that's seat as opposed to the two Illinois Senate assholes: Rod Blagojevich and Roland Burris.

The odd nature of replacing a senator by gubernatorial appointment is rooted in the federal system whereby states remain, constitutionally, more powerful than the central government in some instances.

There is a value in having a governor fill a vacancy; it usually happens in days, thus not depriving the state a senator for as long as it takes to mount an election. In the past, this has worked well because most governors have their own political hide at stake if they make a bad appointment. Some governors have appointed themselves, and the result has almost always been their defeat at the polls at the next opportunity voters have at them.

In recent years, I believe some states have reformed the process to allow for an immediate election. But the practice of gubernatorial naming goes back to the fact that until 1913, senators were not elected at all, but appointed by state legislatures. The beauty of our system, however, is checks and balances; thus the Constitution is clear that "Each house shall be the judge of elections, returns and qualifications of its own members."

The Senate leadership, a daily media oxymoron, will say that the circumstances of Burris's appointment make him unqualified. But this "leadership" of yo-yos Harry Reid and Illinoisian Dick Durban must be 10 times dumber that they think Blagojevich is. How could they not have foreseen the governor naming a saintly African American?

Roland Burriss is a perfectly reputable machine hack, whose probity is established by the fact he has lost elections in the past. And he will be probably be seated. 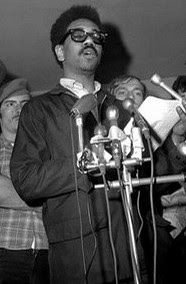 Who should be unseated by his constitutents and frozen out of all congressional power is that one-time thug Rep. Bobby Rush (the only person ever to defeat Barack Obama) who choreographed the forthcoming drama as a lynching if the Senate doesn't bow to his extortion. Rush has plenty of experience as a racist blackmailer as former "defense minister" of the Chicago Black Panther Party and cohort of the terrorist organized crime unit known variously as the Blackstone Rangers, Black P. Stone Nation and El-Rukn.

I thought he'd matured over the years, but yesterday's performance showed Bobby Rush to be more than mature -- overripe to the point of being rotten.

If the Senate does reject Burris, as Obama has called for, then we will indeed have passed into post-racialism.
Posted by Ira