I guess every family claims some famous or notorious relative. Somewhere in my own family tree, I was told but cannot prove, is/was the actress Piper Laurie. You remember her, perhaps, as the mother in "Carrie."

I am also related to the one-time revolution David Horowitz, who made Bill Ayers look like a Sunday school teacher before having a lobotomy and becoming crazier right wing than Ann Coulter's evil twin.

But it is my wife, who claims ancestry to the Mayflower and who also has Canadian roots back to that country's third prime minister -- the latter connection involving one Arthur Christoper Orme Plummer, an actor of some repute.

They are second cousins once removed, which makes me probably Amanda Plummer's third cousin twice removed by marriage or something, which probably ought not to invoke any Biblical injunctions if either of us met.

Mr. Plummer, who has just published a memoir, was speaking and signing his book at an independent book store this evening, reminiscing under the prodding of XM Radio's Bob Edwards. Despite Mr. Edwards' soporificity, I managed to stay awake, marveling at Mr. Plummer's voice and irreverence.

I may be the only person in the Western world never to have seen "The Sound of Music," and judging from Mr. Plummer's accounts, I consider myself lucky. (He refers to this movie, which sat on a shelf in Hollywood for eight years before someone decided that people would actually see a film if it was billed as a horror flick,"THE HILLS ARE ALIVE!," it as S&M.)

Anyway, my late mother-in-law and Mr. Plummer were second cousins, and once I was made aware of the relationship, I noticed a slight resemblance of mouth, chin and jowl.

Long story short, we went to the reading and signing, with this result: 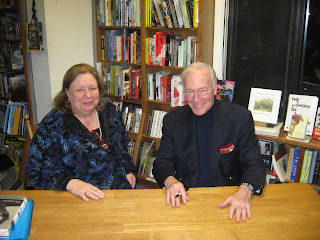