Last week, the right-wing press-haters were doing the happy-dance of hypocrisy. After spending a lifetime excoriating the mainstream media, they pounced, like Felix on a ton of catnip, upon a column by the Washington Post ombudsman, Deborah Howell, to the effect that the Post had been biased in favor Barack Obama. 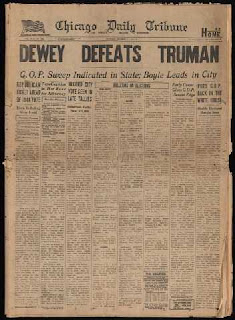 Very simple folks: Newspapers like what is new and what is interesting. McCain benefited from this phenomenon for 25 years. All that is required is that journalism be accurate and fair—not numerically equivalence. No newspaper by itself has ever handed the White House to a candidate with the singular exception of the Chicago Tribune.

Anyway, today, Ms. Howell, takes on a less controversial challenge—praising the cult of the reporter.

When I was young and asking about the meaning of various titles within the profession, my boss told me, “There is no higher title than ‘reporter.’” I have always believed that (maybe because that is the only "title" in mainstream journalism I held.)

Ms. Howell writes mostly about the performance of Post reporters, which is a little unfair because that newspaper has the resources to allow and encourage reporters to spend months and dollars to ferret something out.

Most reporters toil on small stuff and on the run.Most of us, especially those in the wire service end of the business, had as our mission, “Get it first, but first get it right.” Immediacy. What we did get, however, given the technology of the time, was early training in txt msgs.

Nevertheless, reporting is a cult that captures the best and worst in its members and turns them into paragons of civic virtue. The irony is that the very qualities that make you a good reporter usually make you a bad employee!

Good reporters are the heart of news gathering. If it's news, they have to know it. Without them, the public wouldn't have the news and information essential to running a democracy -- or our lives. Whether the story is local, national or foreign, it has to be gathered on the ground by a reporter.

What makes a good reporter? Endless curiosity and a deep need to know what is happening. Then, the ability to hear a small clue and follow it.

For the rest (and an obligatory look at the post.com’s advertisers), go to: