Horizon on the Prize 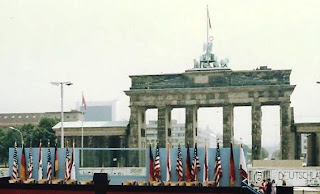 I’m beginning to think Obama should throw away the Baedeker for his ballyhooed Berlin trip.

He might innocently misspeak and say something like, “I want to have sex with the Polish people” (Carter) or “The Poles are free” (Ford) or even, “I am a jelly doughnut” (Kennedy).

All he has to do now to become president is go into a stall and do as little as possible. (No, not the Larry Craig stall. Come on, people!) Why? Because Bush is adopting Obama’s foreign policy, undercutting McCain by the hour.

In the past two days Bush:

As for the controversy over Obama making a speech at the Brandenburg Gate (the controversy, someone suggested, should be called "Brandenburg Gate-gate"), at least he isn't planning to visit a cemetery where Nazi SS officers were buried (Reagan.)
Obama may have big ears; Republicans have tin ears.
Posted by Ira