Riddle
Q) -- What do they call the Fourth of July in England?

One of my annual rites is attending a small-town parade in the Washington suburb of Takoma Park, Md., known as a "people's republic" for its extreme liberal politics in a very liberal county in a moderately liberal state. It is an informal parade to the point of being disorganized and prides itself on multiculturalism. There are more cultures in this parade than in Centers for Disease Control flu labs. 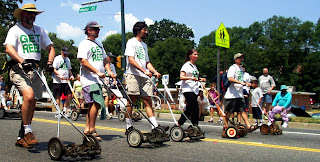 African-American Shriners and suburban satire in the form of lawn mower drill teams. 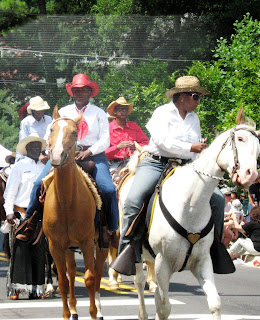 Today, there was a woman perfectly symbolizing the politics of the leafy old village that has held this celebration for 119 years. She wore a tee shirt that said only, "Got Privilege?"

As critical as I have been throughout my life in this country if its people and their rulers (two-thirds of my life having existed under Republican presidents), I find nothing wrong, and much to be desired, with celebrating the founders, the flag and fidelity to country.

But not every day and not on my lapel, my bumper or on tawdry clothing.

And running for president and winning the nomination of the nation’s oldest party is pretty patriotic.

At least as much as finishing at the bottom of your college class, being shot down while spreading terror by strafing and bombing another race of people that you can’t even see. Actually, I sometimes think fighter pilots (or naval aviators as some are called) are cowards. Infantrymen usually come face-to-face, or pretty damn close to it, with their adversaries. And it is at least as patriotic as being born into a military elite and dumping two wives until you find a trophy worth a hundred million or so.

We know so little about history. How many of us know that the Declaration of Independence refers to “savage” Indians and was adopted only after mention of slavery was deleted?

But some ideas are eternal.

Referring to another George, The Declaration says (and draw your own conclusions about its relevance):

The history … is a history of repeated injuries and usurpations, all having in direct object the establishment of an absolute Tyranny over these States. To prove this, let Facts be submitted to a candid world.

He has refused his Assent to Laws, the most wholesome and necessary for the public good.

He has forbidden his Governors to pass Laws of immediate and pressing importance, unless suspended in their operation till his Assent should be obtained; and when so suspended, he has utterly neglected to attend to them.

He has refused to pass other Laws for the accommodation of large districts of people, unless those people would relinquish the right of Representation in the Legislature, a right inestimable to them and formidable to tyrants only.

He has obstructed the Administration of Justice by refusing his Assent to Laws for establishing Judiciary Powers.

He has erected a multitude of New Offices, and sent hither swarms of Officers to
harass our people and eat out their substance

He has affected to render the Military independent of and superior to the Civil Power.

He has combined with others to subject us to a jurisdiction foreign to our
constitution, and unacknowledged by our laws; giving his Assent to their Acts of
pretended Legislation.
…

For depriving us in many cases, of the benefit of Trial by Jury.

For transporting us beyond Seas to be tried for pretended offences.
…

He has plundered our seas, ravaged our coasts, burnt our towns, and destroyed the lives of our people.

He is at this time transporting large Armies of foreign Mercenaries to compleat the
works of death, desolation, and tyranny, already begun with circumstances of
Cruelty; Perfidy scarcely paralleled in the most barbarous ages, and totally unworthy the Head of a civilized nation.

Farewell to the Bozo the First

Imagine owning a character that is so well known it has become a generic term for clown! Imagine Willard Scott being among the first to play a franchised Bozo on local TV!

Larry Harmon bought the rights to and exploited the image of one of my favorite icons, and childhood toys. He died the other day, but his image lives on.

At 1600 Pennsylvania Avenue.
Posted by Ira