The depths to which professional sports will go to pander to the administration and the military gets lower every day. I have commented before about the distaste of having someone else's God bless this country and no other every 7th inning -- but only on Sundays and holidays.

Now, at nearly every game this week, and on most other days I have attended Nationals Park in Washington, soldiers, sailors and Marines are guests of the ballclub, participate in pre-game ceremonies and otherwise are made the focus of an event that should have nothing to do with war.

Now, teams are wearing camouflage uniforms and caps with stars and stripes embedded in the teams' insignias! 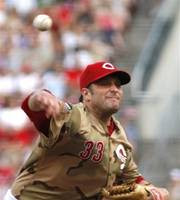 And what for, I ask? To show support for the troops -- troops who volunteered to kill others and die themselves in yet another misbegotten, criminal act of U.S. foreign policy?

If these ball clubs wanted to support the troops -- and really they are supporting one of their own colleagues (former Texas Rangers principal owner George W. Bush) -- they should encourage their players to sign up to fight themselves. And pay them their baseball salaries. Some of the best ballplayers of a generation -- Ted Williams and Bob Feller to name two -- lost years of career statistics and games played at the height of their skills to volunteer to fight in World War II. Williams was in the Korean War as well -- a total of five years of lost statistics that would have cinched his status as the greatest ballplayer of all time.

Of course if the Major Leagues actually encouraged players to join the army -- and what grenade throwers they would make! -- many would be excluded because a large plurality of them are not U.S. citizens. Among all players, some percentage would be found even more mentally and morally unfit to serve than the troops they pretend to support.

Remember this: The average age of a Major League baseball player is about 28, two years older than the average age of a dead soldier or Marine. At 28, a good soldier is or is enroute to becoming a captain. (The average baseball salary is about $3 million a year, the amount that former cokehead Keith Hernandez once said doesn't go as far as people think.)

So the next time you are asked to applaud our troops or sing the execrable "God Bless America" at a ball game, have the courage to sit down, keeps your hands still and shout out, "Why don't YOU volunteer?"
Posted by Ira