this Mississippi Sun Herald article, taken from the P.R. Newswire, tells a pretty good story, for those of you who have not yet heard:
© 2008 Sun Herald. All Rights Reserved.http://www.sunherald.com 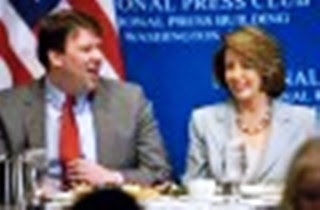 "This recognition is a well-deserved reflection of the great work Jon Allen does for us on an ongoing basis," said CQ President & Editor-in-Chief Robert W. Merry.
Allen won for his October 2007, CQ Weekly cover package, "Manifest Disparity," in which he explored the development of appropriations earmarks and the way they are doled out among members of Congress. This multi-part cover story was the result of in-depth analysis and examination of earmarks from House-passed 2008 spending bills.
His piece examined the disparity in earmark distribution among Members of Congress based on their race, relationship to House leaders, political orientation and proximity to "Murtha's Corner," referring to John Murtha's (D-Pa.) decade-long votes and earmarks trading post, which is located in a back corner of the House floor.
"As Jon and his editors probed into various facets of the earmark distribution game, it became clear that his work would make for a fascinating and groundbreaking piece of journalism," said CQ Editor Michael G. Riley. "In the end, Jon, with some help from across the CQ news operation, produced a comprehensive and insightful project, one that we think opened plenty of eyes, and proved a good read to boot."
The award is named in memory of Sandy Hume, the reporter for The Hill who broke the story of the aborted 1997 coup against House Speaker Newt Gingrich. It honors excellence and objectivity in political coverage by reporters 34 years old or younger for either a single story of great distinction or for continuing coverage of one political topic. This is the third time a CQ reporter has won this award since it was established in 1999.
Allen is a CQ Politics reporter who also contributes to CQ Weekly and CQ Today. He launched his Washington journalism career at CQ in 2000. In addition to elections, he has covered congressional party leadership and the federal budget and appropriations process. He is a frequent guest commentator on television and radio news programs, including CNN, MSNBC, FOX, C-SPAN, NPR and many others.
Posted by Ira