Urine It to Win It (Redux)

This work business -- at least returning to a 40-hour week -- sure makes it hard to keep up with everything as before. Not surprisingly, the last post here was on the day I began my new job. I guess I forgot to keep up because I was overwhelmed with finally having an office with a window.
Or maybe I am getting up early, working 10 hours a day so I can keep one day a week to myself, and staying up too late following five fantasy baseball teams. Anyway, here is my new contact info, followed by some thoughts about a new environment:

Yes, this is the famed National Institutes of Health, whose two most striking physical features are its campus-like setting in the midst of suburban congestion and its prison-like security installed after 9/11 in case a terrorist thinks he could thwart an institution that combines the worst of government, hospital and academic bureaucracies. Lotsa luck.

One of the things about this job is even though I am technically an employee of Kelly Services, it would be considered bad form to continue some of my more trenchant musings about the head of the executive branch of government. I don't need to anymore, given that 80-plus percent of the American public agrees with them. Here, though, is what an anthropologist has found as a model for the current bureaucrat in chief. 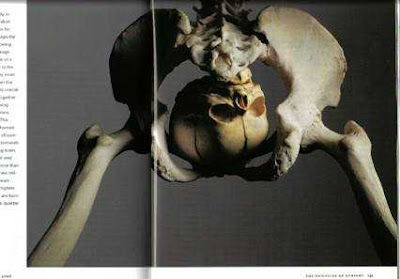 The other interesting thing I found was the paradox of the men's rooms. There is one very close to my office, which is great now that I have, to quote the commercial, a "growing problem. The first day, I walked into it and was befuddled by the apparatus on the wall where a urinal ought to be. It wasn't like anything I had seen before. I didn't know whether to stand in front of it or sit in it. 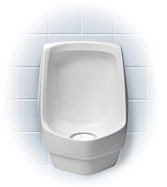 "It" turns out to be a "water free" pissoir that claims to save 40,000 gallons a year per unit. Big unit! For more information, feel free to go here. (groan)
Yet here is the paradox. I was in an older building on campus today, and it has a men's room where it looks like a servant might have lived in the century in which this edifice was built. It had regular old-fashioned urinals, but the soap? Individual containers of a pumpable antibacterial soap -- which as everyone but the brains at the world's largest biomedical institution knows can cause more illness than it cures.
Not to worry. A recent study showed have also shown that if no one else is in the men's room about one-third of users don't bother with the soap and water at all.
Posted by Ira