An Outbreak of Backscratching

ESPN, the network of 24/7 testosterone, has joined with the Ad Council and the federal Agency for Healthcare Research and Quality to promote the idea that men should get screened

for medical conditions that affect them -- prostate enlargement, high cholesterol, colon cancer and other stuff likely to be caused by sitting on the couch all day.

Having started my new job today for another federal health agency, I will not excoriate AHRQ, whose mission is to find out what works and what doesn’t. But time after time, studies on screening women for breast cancer or everyone for lung cancer find that it doesn’t pay, either in better overall health or in saving the monstrously expensive health system some money.

Sure, you will her testimonials from people who went for a screening for something they didn’t know they had and wind up being saved in the nick of time from cancer. But overall, it doesn’t happen that way. Overall, some people are misdiagnosed, get surgery and bills they don’t need, are injured or killed by the inherent risk of surgery and suffer mental anguish before finding out their test was a “false positive.” Other people are diagnosed with a small mass that would never have grown anyway, wasting money, enriching the drug and devices industries and skewing mortality statistics.

My advice? When you have a symptom, get it diagnosed and in consultation with two doctors, figure out the odds of it being as bad as you fear or as good as you hope. Fear-mongering is what the drug companies do. And come to think of it, the white-hat Ad Council gives away free production services on behalf of the nation’s broadcast advertisers and networks give away free time to the Ad Council – both of which would not exist but for the hundreds of millions of dollars spent by drug companies on advertising products that do us very little good.

Celebrating the onset of May, we went to the beach for two nights and three days. It was overcast and cool, but we don’t go to tan or surf. It is relaxing to look at the ocean and not bad to have a couple of nights with no distractions and no responsibilities. Here is what morning looked like from our room.

Odd thing about the shore. I took my ancient handheld GPS device with me as I dipped a toe into the Atlantic. It showed I was three feet below sea level! Some of you may have suspected that for a long time regardless of where I stand. But it raises the question of what is “sea level” anyway? I think it’s a government plot. 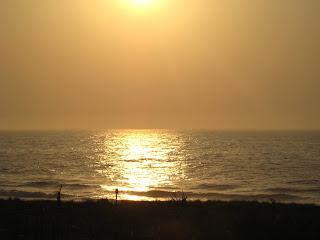