For 20 years I held partial season ticket plans for the Baltimore Orioles (in the absence of a team in Washington, only 38.4 miles away), meaning my kids grew up as O’s fans. Among all four of us that meant we attended attended between 350 and 400 ball games there, including the nights Cal Ripken tied and then broke the “most unbreakable” record.

For most of those years they stunk. Which is odd considering the record they set on this date, having had more players on their payroll who were linked to illicit “performance enhancing” drugs than any other team.

For you baseball fans, look at this lineup up of Orioles named in the Mitchell Report.They could go out right now and win a few games, maybe. 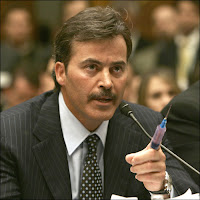 For the past three years, I have been – and I will remain – a fan of the home town Washington Nationals and am staring at a bill of unimaginable proportions for a full season ticket plan in the team’s new stadium in 2008. We had/have a couple of no-account juicers, starting with the recently acquired Paul LoDuca and the departed Jose Guillen, Gary Bennett, Mike Stanton and the soon-to-be-forgotten Nook Logan.

The sad part is that so many of the names in the report are marginal players, the guys who in their quest to become the 25th guy on the team relegated the noncheaters to the minors. I am angry because as a season-ticket holder for 20 years, I paid to watch an adulterated product.

It will be interesting to see if one of the players mentioned in the report, Fernando Vina, will return for a second year to his job as an ESPN baseball on-air analyst or whether the only analysis required from him is his urine.

Toward the end of the 2002 season, according to the report, a bullpen catcher for the Florida Marlins was transporting drugs for certain members of the Florida Marlins and told investigators virtually every player on the team was ‘doing something’ ranging from steroids and greenies, to marijuana, etc.”

The following year, the Marlins won the World Series.

It's been a bad week or so for Hillary Clinton. After declaring that the campaign in Iowa had reached a point where “now the fun begins,” her campaign had to backtrack from digging into Barack Obama’s kindergarten record and for having a top counselor wonder aloud if the Illinois senator had ever sold or given drugs that he admitted using to other people.

These people may be too clever by half, however. When one of her top strategists, Mark Penn, was asked by Chris Matthews about these gaffes (a gaffe being defined as telling the truth and getting caught at it),

Penn said the Clintonistas had no intention to do harm. Besides, he said, the American people don’t want the campaign to be about Obama’s “use of cocaine” or about unfounded rumors that he was secretly a Muslim.

Gee, thanks for elevating the campaign, Mark.

You all probably have heard the story of the four young Jewish people who were beaten up on a subway by white punks after someone wished riders, “Merry Christmas” and one of them replied with a cheery “Happy Hannukah.” They were rescued by a Muslim.

It’s a great seasonal story that will probably be turned into a perennial made-for-TV movie -- once the Jewish writers end their strike.

But it couldn’t have happened without help from Bill O’Reilly and his two-year campaign to convince Americans, against all evidence, that there is a move by “secular liberals” to ban Christmas greetings.

Was this attack the result of the bibulous, bilious blowhard’s hate jihads? Or were the attackers stupid all by themselves? Could be the latter. One of them said, “Happy Hanukkah, that's when the Jews killed Jesus."What kind of religious training did this Christian get? Everyone knows the Jews killed Jesus on Good Friday.