When she began in journalism, the only jobs open for women were as office assistants 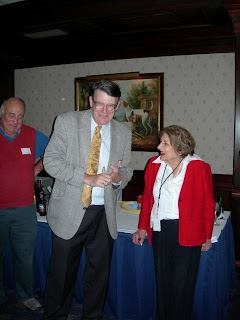 or society writers. When she ends her career, said one of her former bosses the other night, it will be after hounding yet another Clinton in the White House.

I am speaking, of course, of Helen Thomas, dean of the White House press corps, my former colleague at the old and once-great United Press International. The company, long since trashed by a series of rapacious morons and now a mouthpiece for the Moonies, is celebrating its 100th birthday this year. But the tribute to Helen that I attended last Friday night had nothing to do with the current UPI but with a group of "Unipressers," veterans of a grand tradition of working for peanuts, competing against a larger corps of staid Associated Press reporters and pretty often beating the crap out of them in the competition for space in newspapers -- a feat accomplished by better writing and the fearlessness born of being too stupid to know what we were up against.

So these 70+ Unipressers from all over the country gathered at a private club (that no self-respecting wire service grunt should ever occupy unless it was on fire) to say hello to her and to say thanks. I went not only to join in the accolades to the most famous journalist I ever knew, and the most gracious when off the job, which is practically never, but to see how badly my peers looked! I came off great, according to my wife and some folks who couldn't attend but saw pictures of the event. Must be good genes and clean living, someone said. The truth is there is a picture of myself in the attic that is starting to yellow, fray and melt with each nefarious deed I accomplish.

Helen Thomas has covered Washington since 1942. That is 65 years, folks. She has covered the White House since 1961, when she began as the Jackie Kennedy reporter under the legendary White House bureau chief Merriman Smith, he of Pulitzer fame for riding in a radio-car in Dallas, dictating a bulletin that the president had been shot and then ripping the radio-phone from its mooring, denying his AP competitor a chance to file.

I was lucky enough to work with Helen from my first days in the Washington bureau, at the height of Watergate. On a normal day, she would call the bureau around midnight to dictate her story for the next day's afternoon newspaper cycle, and I would take the dictation on then-brand-new video display terminals (computers!). Helen is short, brusque and to the point on the job. Yet she never minded that I would take her rapid-fire dictation swiftly while suggesting some pruning, rewording when necessary and re-arranging. It was on that shift that the lone deskperson would get crank calls to settle bar bets and other calls from creatures of the night. Among them were drunken requests for me to patch through to Helen at home for some boozy broad name Mitchell. Martha Mitchell, that is. Her story is about to be chronicled on film, but I don't think I will be in it, since my agent hasn't called me in years.

The other night, when I shared some public reminiscences about working with her in 1973 when I was on the overnight desk and from 1983 to 1988 next to her in the cramped White House press quarters, she blurted out, in gratitude, "He wrote my stories!" Maybe I wrote a little better than she did, but there was no greater teacher about how to report and how to stand up to the scurrilous scalawags who dedicate their miserable little lives to seeking the presidency and then bitch about the public wanting to know what they are up to. Frankly, I am a born editor, but people know me as a damn good reporter, and that is only because I learned it hour by hour from some of the best, some of those no one has ever heard of and from one, Helen, whom everyone has.

The gathering was billed simply as a "Helen Hootenanny" in honor not of a great reporter but of a woman whose travails and persistence made it possible for generations of other women to reach the highest levels of serious journalism and for Katie Couric, daughter of a one-time Unipresser, to get low ratings. Actually, pretty much everyone who was anyone in print, radio, television or photojournalism worked for UPI at one time, among them Walter Cronkite and David Brinkley.

Helen, as difficult a person who ever interrogated or reported about nine presidents, is, off the job, the most generous person you can imagine, taking care to do favors for the least of her colleagues, the "legmen" who grabbed her copy on the tarmac of a thousand airports and teletyped it back to Washington. Someone who will travel anywhere and stay up 24 hours to fulfill a speaking commitment to student groups at out-of-the-way colleges. Someone who has as many awards as any reporter ought to have, except the overrated Pulitzer, but who acts and reports like a curious cub even at 87 years of age, only 13 years younger than the news organization whose greatest claim to fame was as the employer that underpaid her for 57 years.

She doesn't travel as much as before, given her age and her new role as a columnist for Hearst Newspapers, but the only place she needs to is to the front row of the White House briefing room to give press secretaries and presidents holy hell.
Posted by Ira