Working from home as a communications consultant means doing things on other people's terms and deadlines, which is fine, because I don't have to work a 40-hour-week, I don't have to shave and I don't have to get dressed. I can also work at any hour of the day.

You would think that about ready to enter a seventh decade, I might have picked up some good work habits. But it's just like high school. I had a big writing project assigned a month ago, and by the time I thought of getting down to it last week, I was reminded that since the first draft was due that very day I shouldn't worry because the principal for whom I write would be out of pocket and I could have another week.

Well, I managed to do every possible thing -- computer games, chat, personal errands, household chores -- except the project until about last Friday, with the final product due today, on Tuesday. As you might figure, I was up until 4 a.m. trying to finish. Four hours of sleep later, I completed everything except a couple of citations that I can dig up later. I then went to an important function thrown by the boss so I could get out of the house and also casually mentioned that the paper would be in her e-mailbox when she returned.

I have no idea how good a job I did, as this kind of work is totally a matter of jumping through hoops that keep changing shape. Anyway, given the hoary platitude that a clean desk is indicative of an empty head, I thought I would exhibit a piece of my mind. 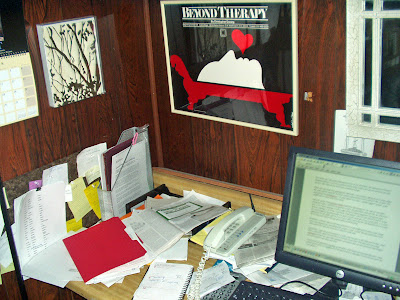