Two weeks ago I mourned in the space the loss of one old friend – the retirement of Robert F. Kennedy Stadium. I sort of lost another old friend this week, but I am not sure how sad I am about it, other than sorrow every time something changes.

Last year, tiring of having Damocletian dead limbs threatening my cars and my own limbs during any storm, I called this progressive county and asked that someone trim one of the two trees, both of them standing on public right-of-way. Nothing happened. During last year’s election campaign, I wrote the councilman. I had always voted for and asked for him to nudge the county highway department (the tree guys.). Didn’t even get a form e-mail reply, so I voted against him for the slight, and he is now out of office, his being the only Republican in a county more Democratic than a Chicago graveyard notwithstanding. 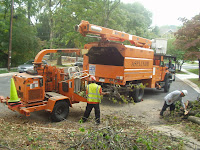 Eventually, someone came around and painted trees in the neighborhood with a huge orange circle, including my tree, indicating work would be done on them. Months passed and every other marked tree had been trimmed or otherwise dealt with.

Last Friday, a sign was posted saying not to parkunder the trees on Monday and Tuesday. Aha!! Well, on Monday, when I returned from a mid-day errand, there they were, the big orange Asplundh truck and two guys with chainsaws and ladders (the one who spoke the least English up in the branches near the power lines.

I went inside and attended to business to the lullaby of the Bethesda Chainsaw Massacre. I then peered outside and to my chagrin, all of the limbs had been amputated. It was beyond repair! This was like going into a barbershop, asking for a trim, snoozing in the chair and waking up bald as a pre-rehab Britney. 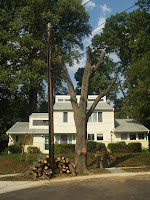 So most of the tree is gone, another crew will take down the stub – the clawlike, naked remnants of what was once a 50-foot tall, 4-foot-around gnarled leaf factory.

I’ll miss it – a little. It will cut down the shade over a house already too hot in summer (and 90-degree October days!) and it will make the cul de sac arboreally assymetrical. But there is always a bright side. Very bright on sunny days. It means my leaf-collecting duties are cut by about 25-percent and, in an O. Henry twist, it means we might now have room to put a driveway in so the cars won’t get bombarded by sap and bird poo. Which of course it won’t now anyway.

I just noticed, as a thunderstorm approaches, that the tree they took down wasn’t even the one that was dropping branches!

But at least the county arborist (we also have a county sommelier and a county brie taster) said the tree was doomed anyway.

Now, after the stump is eventually pulled in a few weeks or months, I have the right to ask for a new tree from a prescribed list. But by the time it looks like anything, I’ll be as dead as the Norway maple.