A Quarter of a Century and Nothing Changes

When the story about the gay Republican congressman Mark Foley propositioning Capitol pages, I mentioned to my son, who is journalist covering Congress, that if you look hard enough for slime on the Hill you will find it.

"Why, I recall," said the old man stroking his white stubble, "back in '82 the heat was so great to find out who was doing the Capitol pages that one congressman even issued a statement denying he was gay! Well, son, you've heard the expression, 'he who smelt it surely dealt it.'"

I was referring, of course, to a recently elected representative from Idaho named Larry Craig, about whom you have heard about today or will be hearing about in the future. 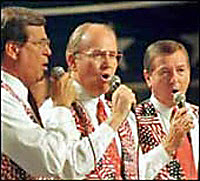 To my surprise and pride, my son e-mailed me this story an editor of his retrieved from Nexis-Lexis, and I share it with you in glory, even if it took 25 years for the author’s suggestion to come to fruition. (oooh, bad pun).

Not that there is anything wrong with being gay, of course, but there is something a little illegal about soliciting sex in men’s rooms and hypocritical for voting against gay interests in the name of God, country and Bush.

While none of the rumors has been confirmed, the expectation is that Congress will move quickly to investigate itself and possibly expel any wrongdoers before the November elections.

The Arkansas Democrat reported Saturday that the FBI gave the House Ethics Committee the names of six congressmen alleged to have had sexual relations with male pages. It also said the FBI has expanded its probe into allegations of congressmen soliciting sex from female pages.

A resolution authorizing the Ethics Committee to undertake a full investigation will be introduced when Congress returns from its Independence Day holiday July 12. Rep. Margaret Heckler, R-Mass., said she will propose naming a special prosecutor with ties to ''no person, no party -- not even to the institution of the Congress.''

The FBI investigation began weeks ago, after 16-year-old Jeff Opp of Denver, then a page for Rep. Patricia Schroeder, D-Colo., told office aides he was propositioned by a ''Western Republican.''

Other former pages later were quoted as having told the FBI about actual homosexual encounters with congressmen who offered them drugs and promotions.

One page was quoted as saying the lives of the unsupervised 14- to-18-year-olds in Washington was ''sex, drugs and rock'n'roll.''

The number of congressmen involved in either the drug or sex part of the twin scandal varies from ''two or three,'' a Justice Department source said. NBC News said the drug probe involves the offices of two senators and 10 House members.

Rep. Larry Craig, R-Idaho, is the only one who has come forward to acknowledge being a suspect in the pages' allegations. He called the allegations ''part of a concerted effort at character assassination.''

Craig also said he was being unfairly subjected to ''gossip, innuendo and false accusations'' because he is a bachelor, and asked Attorney General William French Smith to expedite the investigation.

United Press International learned one of the targets is a member of the House leadership, which could mean any of more than a dozen members. But Rep. Bill Alexander, D-Ark., a member of the leadership and of the Ethics Committee, disputed the disclosure.

Reporters checking longtime sources in the gossip-charged atmosphere of Capitol Hill have heard maybe a half-dozen names mentioned - none confirmed. Never before have so many aides bragged about their bosses' affinities for beautiful women, as if heterosexual misconduct was suddenly acceptable.

Among the most commonly, and perhaps unfairly, mentioned names are bachelors, members not running for re-election and those who represent areas where drugs and homosexuality are more socially acceptable.

The nation's capital itself has one of the most politically active and prominent gay communties, and cocaine -- the expensive glamor drug - is known to be widely available.

Justice Department sources have been quoted as saying no one will be pursued on grounds of sexual preference. The grand jury looking at cocaine use was said by a source to not be interested in going after congressional customers -- only the pushers.

The allegations that lawmakers lured teenagers into illicit sex and used their offices for drug transactions could devastate an already low public opinion of Congress.

Public reaction has not flooded Capitol Hill in thelast few days, mostly because Congress was winding down for its two-week vacation when the stories broke. But one House press secretary reported the following comment from a middle-aged male constituent: