Now, really. How many of you – how many of anyone in this country – know the name Kia Vaughn?

While her family and friends and a few fans may know of her, Kia Vaughn is not a household name. And that’s the way she says she wants it.

Except she is saying something she doesn’t believe and she is doing it for money. In other words, she, or anyone else who is "considered as having compromised principles for personal gain" is, according to the American Heritage Dictionary, a ho. In Kia Vaughn’s case, she is a “nappy-headed ho.”

Now you know who she is. She was one of the Rutgers basketball players sullied by Don Imus last April in a case that exposed his “comedy” as the mere rantings of a tired and boring old man, exposed corporate control of the mass media and exposed Al Sharpton once again as a fraudulent, hypocritical, sleazy blackmailer. 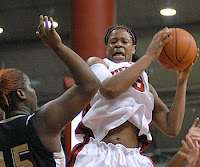 The Rutgers women were not the Scarlet Knights as their uniforms declared but were pawns in other people's money-making schemes. They may be justified in feeling their tremendous athletic achievements were and will forever be overlooked because of the Imus remarks. I don't buy it because no one ever remembers the losing team. Now they will.

This particular nappy-headed ho Kia Vaughn is so upset she was – according to her lawyer – humiliated, embarrassed and mocked that she is suing Imus and CBS Radio.

I would love to see this nappy-headed ho Kia Vaughn in court pressing her bogus claim. It probably won’t even get past the court clerk's office. For one thing, her motives are more suspect than O.J. Simpson’s lifelong pursuit of “the real killers.” She sued on the same day that Imus, described in one news report as “intelligent but not very smart,” beat CBS into submission by waving his actual contract in their faces. He settled for the usual “undisclosed amount” of money for being illegally fired by the corporation in contradiction of specific wording in his contract allowing him to do what he did and which made tens of millions of dollars for the now-tarnished Tiffany Network.

I would love to see this nappy-headed ho Kia Vaughn explain how filing a suit against one of the best known people in America -- who she helped get fired! -- would help her regain the quiet anonymity she claims to seek.

I would love to see the nappy-headed ho Kia Vaughn’s lawyer explain his statement that "The full effect of the damage remains to be seen” -- in light of the fact there are no people in this country, except this author, who ever held the Rutgers women’s basketball team in anything other than high regard. Does anyone think this nappy-headed ho Kia Vaughn or her teammates came out anywhere but on top in this incident?

I would love to see this nappy-headed ho Kia Vaughn’s lawyer make a case that her privacy, reputation or good name was sullied after she went out of her way to make herself a public figure by donning a baggy uniform, shooting baskets and going on the Oprah show. (It is well established law that public figures cannot be sued for defamation except if it were committed with “reckless disregard for the truth.”)

There is one big truth here: Kia Vaughn is nappy-headed. Neither she nor anyone else may have considered her a ho before, but filing this lawsuit makes her one now.
Posted by Ira