I think it is fair to say most people upon awakening stretch, put their feet on the floor and go to the bathroom to empty their bladders.

I am no different. Except when I tried that on Sunday morning, I wound up in the emergency room, in a profuse and hours-long cold sweat and dizziness that prevented me from even propping myself up on an elbow. For about five hours, I was staring upward – at the bathroom light fixture, the ceiling above the stairwell of our house as three hefty paramedics tried to maneuver me downstairs, the trees above my yard, the inside roof of the SWAT-team sized rescue squad vehicle and the fluorescent lights of hospital corridors.

Long story short. As I stretched in bed, I developed an excruciating cramp in my left calf. This has happened before. I screamed and jumped out of bed to work the kink out, stood up and felt the sweat pouring like I was Albert Brooks in “Broadcast News,” felt tingling from my shoulders downward and the worst nausea I can remember. I immediately thought “the Big One! A heart attack.” But I really had to pee, so I did (and was told later I completed the job rather neatly). The next moment of awareness was my wife screaming my name, my head lying on the tile threshold between bathroom and bedroom, my right knee bent and sweat dripping off my nose.

As she called 9-1-1, she yelled instructions to me, like “Don’t Move!” I rolled my eyes even more than they apparently had rolled during the half-minute I had apparently been unconscious. “Move?” I thought. “Why would I want to move. If I wanted to move, how could I possibly!”

Now, I must admit I have had a couple of similar episodes long ago, but none so dramatic, severe or long lasting. And I feel somehow less of a man today, home from the hospital, because it was not a heart attack, a stroke, a runaway clot, a seizure caused by continued Republican ruination of the country. It was vasovagal syncope brought on by a combination of dehydration, low blood pressure and urinating.

It happened twice in a few minutes during one flu episode about 25 years ago and again about 20 years after having a drink on an empty stomach and standing up. This time, although it wasn’t apparent until hours later, my head hurt and my upper back was bruised. Apparently the corner of a wall broke the fall so that my head bounced on the floor a little less forcefully than it might have. But no one paid attention to THAT!

Being somewhat of a narcissist, I wasn’t embarrassed at all by the thought of the neighbors standing outside or peering through windows as I was hauled out on our quiet cul de sac like a sack of yard waste. And I did get a nice “get well” drawing from the 5-year-old who helps me garden.

The hospital I went to doesn’t have the greatest reputation in the world, but it does have the advantage of being less than a mile from our house. The emergency room staff was fantastic, and it was pretty clear pretty soon that I would live, but that tests would have to be done to see how “big” this “one” would be. Luckily, the ER wasn’t crowded that Sunday morning, the most common reason in my neck of the woods for any Sunday morning visit to the ER is faulty bagel slicing. Actually, faulty bagel slicers.

Eventually, I was admitted for an overnight stay and put in a room on the Med-Surg unit. Med-Surg is another way of saying general crap diagnoses; nothing interesting like cancer, intensive care, trauma, pediatrics, psychiatry or even ob-gyn.

The room happened to be directly opposite the nursing station, producing a cacophony of beeps, buzzes, dings, chimes, p.a. announcements and – unconscionably -- party-level chatter hilarity at shift change at 11:30 p.m.

Everyone was nice, as befits a privately owned hospital in competition for “customers,” but at no time was anything – blood tests, radiology tests, food service – done in coordination with the other. Each department operated on its own rhythm not necessarily to the benefit of the patient. I must have had to tell my “story” at least a dozen times to a dozen people. These days the records are now entered into computers, but they still don’t seem to be shared.

One lesson is that if you are sick or injured enough to be admitted to the hospital, you need someone with you who will look out for your needs, and, indeed, your life. In this case it was, naturally, my wife, who took this episode much more seriously than I.

The final insult was that while I knew the night before I would be discharged the next day, and the attending physician told me that at around 10 a.m., I was not actually let go until 4 p.m. Staff blamed the doctor for completing all of his rounds before signing off on the discharge, but when the nurse in charge of my care finally read me the discharge instructions and handed me a copy, it appeared that the doctor had signed off an hour and a half earlier and she did not find it until I dressed myself, ripped off the surgical tape that held the IV ports in place, removed the electronic heart monitor leads from my chest, gathered my belongings and stood by the door like an impatient diner at a second-class restaurant.

Anyway, there is even a more important lesson. As in everything else, medicine can be pretty simple. When the final doctor I saw – the “hospitalist” – explained I had a good heart (well a functioning one, anyway), no stroke and no clots, he surmised that my vasovagal parasympathetic nerve was sensitive to 1) Number One, 2) Number Two, 3) unheralded dehydration and 4) sudden positional change, I asked two questions.

“Could the frighteningly long-lasting dizziness be due to a concussion from hitting my head on the bathroom floor?” 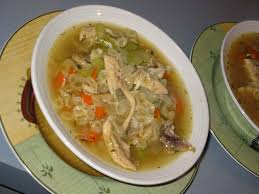 “Since this is apparently an electrolyte imbalance and I don’t add salt to my food because I don’t like it, should I start doing that?”

Answer: “Not really. But chicken soup is good.”