Tales of the Dark Side

Once again, I am impelled to link to Joe Galloway's weekly column for McClatchy Newspapers. Galloway, a former colleague at UPI and co-author of "We Were Soldiers Once ... and Young," was awarded a Bronze Star for heroism under fire in Vietnam. He was called by Gen. Norman Schwarzkopf “the finest combat correspondent of our generation---a soldier’s reporter and a soldier’s friend.”

Here are his latest views on the commander in chief.

Why is it that the Bush administration, in its dying throes, looks
remarkably more like an organized crime ring than one of the arms of the American government? A poorly organized and run crime ring, truly, but a crime ring nonetheless.

Why do I keep remembering the George Bush that I actually once voted for when he first ran for president — the one who talked of bringing in an administration that would look more like the face of America and of giving us a government whose appointees would be honest, upright, fair and moral.

Yes, that’s the one. What happened to him? Where did that George Bush go?

When did he go over to The Dark Side? What enticements did Vice President Darth Cheney offer him? Was it the vision of unlimited, unchecked power over the world? 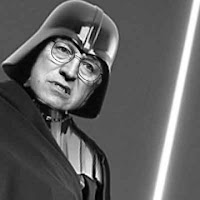 Click here for the whole thing.
Posted by Ira