Now that party girls Britney, Lindsay, Nicole and Anna Nicole are out of circulation, we can turn our attention to the truly perfidious party, the one that stole the presidency, drove the nation into needless war, turned being an American into an international bull's eye, and whose hypocrisy is more staggering than than a convention of stilt-walkers at a wine tasting.

-- When President Clinton was impeached for perjury, it was a crime against the judicial system. When Scooter Libby was convicted of perjury it was for “misstating when he first heard a certain piece of information,” according to that angry little right-wing puppet Charles Krauthammer, the columnist whose mind, as well as body, is in a wheelchair.

So what is the distinction between Republican views of the law and those of normal people? Columnist E.J. Dionne suggests:

…(W)hen an impartial judicial system does something that conservatives don’t like, the will of conservatives, not the rule of law, should triumph. Is there any doubt that a Democrat who used executive power to protect a convicted political ally from the consequences of the legal process would be savaged for abusing his authority?

-- The Rev. James Dobson, whose “Focus on the Family” ministry supports hitting children, waxes sympathetic about Newt Gingrich’s extramarital “affairs.” Most people would call what Gingrich did “adultery.” He was having his latest such "affair" and lying while posing as the Grand Inquisitor of President Clinton for having an affair and lying. With the three leading Republican presidential contenders having had eight wives, suggests pundit Craig Crawford, Dobson’s crowd should be renamed “Focus on the Families.”

-- The U.S. Appeals Court for the District of Columbia overturned the city’s gun ban. Hypocrisy? Well, the Republican majority – led by the Nixonian apparatchik Laurence Silberman, the man who reversed Oliver North’s conviction and who thinks 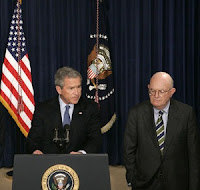 the Bush Supreme Court is too liberal – did what Republican have always detested. The majority created a new legal theory about the 2nd Amendment and thus “legislated from the bench," overturning the will of the people.

Republicans, who keep the District of Columbia in colonial status by refusing to allow its people to be represented in Congress, dismissed the argument that if D.C. can’t be a state, it can’t have a militia and thus is not covered by the 2nd Amendment. Silberman, by the way, helped derail a judicial outcome to the Iran-Contra affairs and excoriated the idea of special prosecutors. But he was the chief judicial cheerleader when special inquisitor Kenneth Starr, a former colleague, went after Clinton. He was also a messenger from the 1980 Reagan campaign to the Iranian government, which withheld release of American hostages before the election so as to ensure Reagan’s victory. The dirty little hack will be responsible for countless more deaths in D.C., but by the time he has died and joined Nixon in hell, most of the newly dead will be people who thought they and a gun can outshoot drug gangs. These newly dead will, of course, be conservatives.

-- The perjuring Attorney General Alberto Gonzales finally surrendered to Senate Democrats and said they could repeal his sneaky attempt to subvert the Constitution by firing U.S. attorneys and replacing them himself without need for timely Senate confirmation. You may recall back in January he said

I would never, ever make a change in a United States attorney for political reasons or if it would in any way jeopardize an ongoing serious investigation. I just would not do it.

Six of the stalwart Republican campaigners who were sacked as U.S. attorneys testified under oath that they were fired for political reasons. By his recent surrender, Gonzales admitted he, too, lied.

-- Gonzales runs a Justice Department, which runs the FBI, which once again has run your and my rights into the ground. The misuse of the “Patriot Act” by FBI agents by illegally snooping into e-mail, financial and telephone records without getting the requisite permission was so egregious that even the attorney general claims he is outraged. The FBI director is immune from removal because he serves a fixed term. I think he deserves a fixed term in federal prison, but short of that he ought to at least have the decency to resign.