“Choice Without Knowledge Is No Choice at All”

Now that the trial is over, I hope Scooter Libby goes to jail.

Not for perjury. I was opposed to this trial and hoped he would be found not guilty on all counts. He should go to jail so he can tell Wolfowitz, Bolton, Feith, Perle, Abrams, Cheney and Bush what to expect.

The damage this trial did was not Libby or to the Cheney-Bush administration. It was to the press, and by that I mean the public, because what journalism does is uncover things corrupt governments want to hide. And that is a public service, not about making money. Media money is made by Anna Nicole Smith and Ann Coulter, may they both rest in peace. 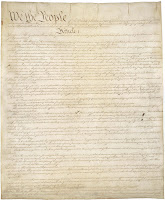 As a result of this trial, runaway prosecutors, or even black-robed Barney Fifes at the local level, will be subpoenaing reporters whenever a news story threatens to expose some inconvenient truth. (Disclosure: In 1967, I was briefly threatened as a college journalist with a subpoena. I forgot how it ended but I don't think I went to jail. Might have helped the career, though, had I.)

Strictly speaking, reporters do not generally and should not have a privilege to withhold information from a grand jury any more than you or I do. But for years, prosecutors have withdrawn from the brink and found other ways to solve cases than to jeopardize a near-sacred bond between reporter and unnamed source. There was an understanding that in the centuries-old “free press/fair trial” debate, the press was entitled, on behalf of the public, to a little leeway. From Watergate to Walter Reed, the wisdom of this unwritten rule has been manifest.

This is a calamity,” said Edward Wasserman, a journalism professor at Washington and Lee University. “It’s a high-profile prosecution that would never have happened if not for the willingness of some of the most respected journalists in the country to wriggle free of confidentiality agreements.

A friend of mine, in a private communication (thus, an “unnamed source”), is worried about what the absolute press freedom I advocate means to individuals.

Like many things that were great and then people took advantage, there is an issue of press confidentiality that concerns me. Say Fox news (there's an oxymoron) says that such-and-such a Dem did this-or-that and they have it on the best authority confidential source. They can ruin someone's life!! I am totally for freedom of the press because I think that in the end the Fox Newses hang themselves, but in the short run, you know these people have no journalistic integrity and they can destroy lives.

So what can we do about that aspect of it? To wit, when the leaker isn't giving us the Pentagon Papers but using leaks to destroy 'enemies' of the admin? I don't have an answer.

It makes me really sad, too.

My answer is that the press, like the public, will get things wrong from time to time but in the long run will get everything exactly right. The harm to individuals can be corrected by more and better free speech, but the harm to the republic is both immense and unseen when people who know things are afraid to tell. And that is the likely result of the Libby trial; sources drying up and journalists even more reliant on official “government truth.”

Information is the lifeblood of, well, life itself once you recognize that DNA is really a protein code. But it is also the most precious commodity in an open society. We make choices every day in commerce – from cell phone plans to breakfast cereals to American Idol contestants – and every two years in government. But, as consumer advocate Trudy Lieberman quotes Carnegie Corporation President Vartan Gregorian , “Choice without knowledge is no choice at all.”

I don’t even care that Valerie Plame was outed. I want every piece of information available about my government. I supported left-wing leakers of the names of CIA spies in Europe, but Congress thought otherwise back in the 1970s and made it a crime to speak those truths.

Cheney, however, did not think information is important to the conduct of public affairs. He ordered Valerie Plame’s name leaked out of spite. There is no act this administration has ever taken that comports with the notion of transparency.

I recognized this at the time, but only now is Congress realizing that one of the most damaging things Bush did happened in November 2001 when he signed an executive order allowing presidents (himself) and former presidents (daddy) to yank previously available White House historical records from public view.

Technically, it shifted from the government to historical researchers the burden of proof in requesting documents that were created and are owned by the American people. In effect, Bush was hiding the records of his father, thinking at the time the old man didn’t want people knowing how he screwed up Gulf War I by not marching on Baghdad. As a result, the public cannot know how the old man got it right and the Clueless One got it so wrong.

A House Committee on Thursday voted, with no Republican opposition, to send to the floor a bill overturning that pernicious order. If the Democratic Restoration keeps rolling like this it will Bush, not Karl Rove, frog-marched out the White House.
Posted by Ira