“In the long run, we are all dead” – John Maynard Keynes

Barack Obama, it is said by wise pundits, is remarkable and praiseworthy for always taking the long view. I think his long view, including normalizing the Trump transition, is disastrous and will forever brand his presidency with the word “feckless.” I don’t think he gives a feck about anything except his own legacy. 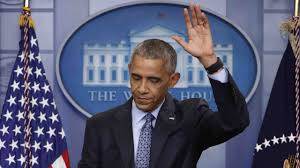 Yes, there have been achievements, mostly on the economy and human/civil rights. Health care? He blew it by letting Republicans he foolishly believed were human beings strangle Obamacare in the crib and then claim it wasn’t working. In foreign affairs, I believe he made the Middle East a lot worse than it should have been. He watched almost silently as Russia got away with murder.

He did nothing, zero, to strengthen the Democratic Party, which resulted in congressional, statehouse, and judicial takeovers by the evil empire of Republicans. Despite popular support for himself, for Hillary Clinton, and for most of the progressive agenda, Obama, like so many Democrats before him, tossed away power in the false hope of compromise and national unity with people who didn’t want it and laughed at him while he chased the chimera.

Nothing epitomizes Obama’s political failure as much as his analysis at his last press conference today of why Trump won. “I mean, there are a whole bunch of folks who voted for the president-elect because they feel forgotten and disenfranchised. They feel as if they’re being looked down on. They feel as if their kids aren’t going to have the same opportunities as they did.”

My, my, my! Who forgot and disenfranchised them, Mr. President? Every single damnable Republican since Nixon.

They seduced the ignorant, impoverished racists of America by taking their votes for granted and stealing their lunch money in exchange for beating down minorities. Obama, like so many Democrats before him, was terrified of standing up for progressive principles, even as a majority the people would have supported them. The “long view” Democrats have been afraid of their own shadow since before Nixon, scared that they might be called names.

Of course, the Trump chumps are looked down upon, but it isn’t Democrats who look down upon them. It is Republicans, and every single economic and political analysis of any value has proven this time and time again. It is the same playbook that Southern Democrats used. So it matters not what the name of the party is. It is the lowbrow, self-hating, uneducated, racist, cousin-marrying underbelly of America themselves who are inaugurating a president who promises to lift them just one small rung above people of color. Their kids will never have opportunity so long as they keep voting for political swindlers.

This optimistic, positive, “long view” of America doesn’t quite work when in the short view democracy and people die. It is truly ironic that had Obama actually been a Democrat, he could have served out his post-presidency on the Supreme Court, where he could have done some good. Now, whatever Obama does as a private citizen will advance no progressive agenda; only his own.