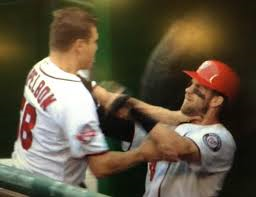 OK, I do believe Jonathan Papelbon was in the wrong for continuing to harangue Bryce Harper after making his point about not running out pop ups. But, God, am I enjoying viewing and re-viewing the video of someone  finally choking that little bitch. He obviously said something that provoked a barely sane Papelbon.


I can’t condone choking the franchise’s, if not the league’s, most valuable player, but at the time it was Papelbon’s game to save, win or lose, so he had a stake in the proceedings.  He is a throwback player, the kind I like, and I have no problem with decking a Harper-like punkass – Manny Machado – for admiring a home run.  And although he was not the one on the team to do it, someone should have gotten in Harper’s face for jaking it whenever he feels like it.


Harper’s goldbricking wasn’t because he was tired after a long season or the fact that he would have been safe anyway if the ball were dropped. He loafed because that is his personality. He went 0-4 and had a bad day at the plate the day before (except for his game winning double).


Every time this prima donna makes an out that he doesn’t think he should make, he sulks on the way to first, sometimes flinging his bat like a chimpanzee flings feces.


As I have said many times before, he plays the game as if he is the center of it and frequently shows no regard for the team – not by choking someone but by playing for his stats.


I read a quotation from Joe DiMaggio once that is the basis for how I wanted the be known for my professional work. After a meaningless late September game after announcing his retirement, he laid out to make a spectacular catch. When asked why he risked injury in a game that didn’t have any significance, he replied, “Because someone might be watching me play for the first time.”


Harper cannot conceive of that notion. He is the best offensive player in the league, but he is also the most offensive.


By the way Harp, where the IS that ring? You might ask Papelbon to show you his.
Posted by Ira