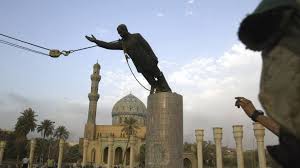 Today is the 10th anniversary of one of television’s biggest lies.

As a reporter trained to look for himself at the edges of the screen after covering a public event, my eyes scanned the perimeter of that TV shot in Baghdad when a few Iraqis were throwing shoes at the Saddam Hussein statue on April 9, 2003.

As the CNN camera pulled back, it exposed the typical distortion of television, specifically the fact there were only about a dozen people in the square. But at the edge of wide shot was a U.S. military vehicle with a crane on it and soldiers hanging off the side just watching -- and waiting. As the CNN live coverage drew even more Iraqis to the square as willing participants in a U.S. TV propaganda production, that military vehicle edged closer to the action until, unbidden, it pulled down the statue. Eventually a rogue soldier mounted a U.S. flag over the scene until some general made him take it down.

The footage and still photographs became an icon of how wonderful America was in bringing “freedom” to Iraq. It was, and remains, a lie; another example in a long history of television and the U.S. military manipulating the truth.

As with the staged photo of Marines raising the flag atop Mt. Suribachi, be skeptical of everything;  for as the basic rule of journalism states: "Believe nothing of what you read and only half of what you see."

And ask yourself if Iraqis, or Americans, are better off today than they were 10 years ago.