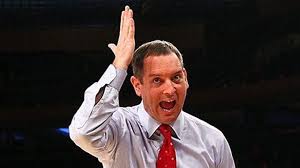 If coach Mike Rice had not used “anti-gay slurs” but used profanity or other insults, he would still be employed. It doesn’t mean he is anti-gay; it means he used whatever juvenile playground insult he thought (mistakenly) would motivate the players to play better. Clearly calling them faggots did not have the intended effect. But denigrating masculinity, politically incorrect as it may be, is a staple of coaching. Always has been. Maybe it won’t be anymore, and I don’t defend it. It is just another in a long list of immoral Neanderthal attributes of organized sports.

Collegiate sports has nothing to do with education or sportsmanship. It’ s a professional undertaking whose only purpose is bringing money into a university. Mike Rice follows in a long line of atavistic psychotic coaches in college and pro sports. His problem is not what he did, but what he did not do, and that is win. When an employee sought to extort Rutgers by presenting the athletic director with a tape of Rice’s antics, the A.D., suspended and fined the coach, who said he would clean up his act. The university president was informed and let the A.D. handle it. (The A.D., of course, is untouchable because he is the one who is bringing tens of millions of dollars into the state university of New Jersey by joining the Big Ten conference.) The system seemed to have worked, until ESPN got hold of the disgruntled employee’s tape. The A.D., and the university president, made a decision to fire the coach – based on bad publicity and the intervention of Gov. Chris Christie.

Other than elections, I don’t believe public opinion (especially on sports radio and the Internet) ought to be the basis for making decisions. As a student in the late 1960s when governors routinely interfered in the affairs of state universities, I will always object to craven university presidents caving in to political yokels whose commitment to public education goes only so far as cutting budgets and showing up at games.

I don’t think college sports has a place in American educational or cultural life. But since it isn’t going anywhere, I have little problem with these pissant incidents that supposedly compromise the uncompromisable.