There is one constituency that someone ought to organize to put the fear of defeat into local politicians – those of us with excellent driving records who are shelling out tax money under the guise of violating speed limits as determined by remote cameras.


I am not for speeding or any other traffic violation. And I am in favor of cameras that catch red-light runners because there is hard evidence that crashes are reduced at such locations. I am also in favor of placing a hidden cop at locations where traffic experts have found there to be a speeding problem.


I have in more than 48 years of driving received maybe four tickets for moving violations. I have had that many speed camera tickets in the past year, and it infuriates me for the following reasons:


1)  It is a hidden tax. As I told my county councilmen by email (no response, of course) that if he would like to raise my taxes, raise my taxes. Just don’t lie about how you are doing it.


2)  Another of my councilmen, who may well be reading this, assured me in a personal conversation that it is fair because you get a 12 mph grace speed. In other words, the camera doesn’t click until you are 13 mph over the posted limit. I find it an incredible coincidence that each of these highway robbery cameras has clocked me at exactly 13 mph over a 35 mph limit each single time. I am not THAT good a driver to go the exact same speed at various locations at various times. So it is clearly a rigged game. 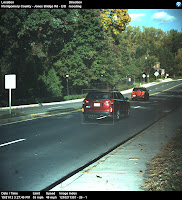 3)  The cameras are placed at locations where the posted limit is much lower than the traffic will bear, so to speak. Yes, many of them are near schools but also on multi-lane roads that are heavily traveled. Yet during school hours on school days, the traffic is heavy enough to make speeding unlikely, if not impossible. Why are these cameras still operating on Sunday afternoons, or mid-evening, when there is not only little auto but no pedestrian traffic?
My solution is twofold: I will avoid certain areas, which means I will do my shopping elsewhere, including other jurisdictions, and I will vote against every single local incumbent when they are on the ballot in two years.


I am not a community organizer, but I am certain if someone would organize a political movement against speed cameras, politicians would take note. And no fewer people would be killed by speeders.
Posted by Ira