Telling it to the Marines (and the Navy)

Last week, after my neighbor volunteered to mow my lawn because his son, whom I pay to do it, was out of town and because I have no functioning mower, I saw a young man I didn’t recognize doing the work. He was staying with my neighbor, who is retired Navy and offering his house as a temporary residence while the mowing man was about to be transferred. Yes, I had a Marine mowing my lawn!  I don’t believe in saying, “Thank you for your service,” but I did give him a beer. 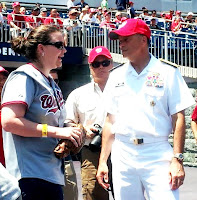 At the July 4th Nationals game, we had really good seats behind the plate, when  Amanda noticed a Navy officer in dress whites and a Nationals ball cap. She asked me if that was a violation of the rules for wearing a uniform. I said I didn’t know, and then after noticing four stars on his epaulets, I suggested he was okay because he probably makes the rules. Sure enough, when she recognized his name from his ID badge and realized he was the uncle of a college friend, Amanda introduced herself to Adm. Sandy Winnefeld, vice chairman of the Joint Chiefs of Staff and the second highest-ranking military officer in the country. He said he “probably” was in violation of the rules, but, as I had told her originally, it was a moot point.
Posted by Ira