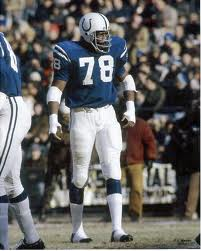 In the fall of 1970, in my first full year as a reporter at UPI, the Baltimore Colts were on their way to the Super Bowl. I only covered home games, but during the week before each playoff game, I was assigned to go to practice and write a story for the national sports wire.

I was 22 and had long hair. Luckily, there was another guy just out of college who was on the team who also had long hair, but not as scary as mine. His name was Jim O’Brien, and he was a rookie from Cincinnati and was the nation’s leading scorer in college the year before. (Football scoring, that is.) But for the Colts, he was the place kicker. And for me, the guy I could most easily talk with and pick up usable quotes from.

So, one afternoon after getting there a little late, I’m in the locker room after practice and it’s just me, him and two other players still getting dressed. One was Billy Ray Smith, an evil, gap-t0othed, redneck from Arkansas. Ol’ Billy Ray started giving me some serious shit about being a hippie, being a girl, and so on. Then he finally started in on the rookie O’Brien. It was getting tense.

Then from a stool on the other side of Billy Ray slowly uncoiled a mass of black steel muscle to his full 6-foot-7 height. He stepped between Billy Ray and the two of us hippies and said in a quiet, menacing, I-mean-business tone, “Leave them boys alone.”

And Billy Ray did.

My savior, for whom I would always have pulled a paw-thorn, was a gentleman named Bubba Smith, a college All-America defensive linemen whose fans chanted, “Kill, Bubba, Kill.”

I was forever grateful, I rooted for him and I saw as many “Police Academy” movies as I could stomach.

And Jim O’Brien? He didn’t have much of a pro career, but in Super Bowl V, with 9 seconds remaining, he kicked a field goal to give the Colts victory over the hated Dallas Cowboys.

So long, and thanks.