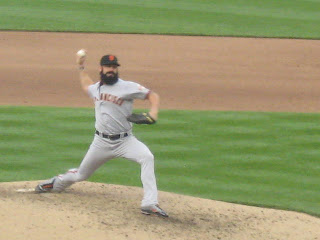 When a supposedly Major League team has more batters hit by pitches than it has hits, and when a team is walked five times, has two hit batters and benefits from an opponent’s error in the first two innings you might expect it to win.

But then you are not talking about the Washington Nationals, which although it is not even the worst team right now, it is is vying hard for the honor.

On Saturday, the Nationals had only two hits, both by the same batter. But the Giants kept trying to give the game away by walking four Nats in the first inning and not letting any of them score. The Nats left 12 men on base – threee in the 1st inning, three when they were walked four times but failed to score, three left on in the 2nd and three left on in the 9th. And so, one can certainly say the offense is not producing.

But the real problem is the dunce that wears the title of manager. This is Jim Riggleman, appropriately a native of a place called Rockville, who has the native intelligence of carrot cake. For two years I have been complaining about him, but this time, I hope upper management starts to notice, also.

The game was lost when the Nats could not get more than one run in the first two innings and when starter John Lannan gave up a home run to a weak-hitting second-string reject Eli Whiteside.

In the 6th inning, with two outs, Riggleman let Lannan hit for himself, admitting after the game he wanted to let his pitcher get credit for a “win,” despite the well known syndrome of a pitcher blowing up on the mound right after being allowed to stay in the game to bat in the late innings. Naturally, Lannan struck out, then walked the first batter he faced in the 7th inning, who of course scored the winning run. It was if Riggleman ushered the winning home himself because with two outs and Giants on second and third, he ordered Whiteside intentionally walked. This was stupid. He is a bad hitter. He is not going to hit another home run. He hits eighth in the order for a reason. So, now with the bases loaded, the Giants pinch hit for the pitcher, and naturally reliever Tyler Clippard walks the pinch hitter to force in said winning run.

In the 8th inning, Riggleman put up Laynce Nix to pinch hit for Mike Morse – a great move because Morse can’t hit and Nix has been on a power surge lately. But the Giants bring in a left handed relief pitcher to face the lefty Nix. Then Riggleman, going by the book, pinch hits for Nix with a right-handed nonentity named Bixler. The results are predictable.

This right-lefty nonsense has been around since Casey Stengel, and it is stupid. You put up the better hitter, because if the better hitter cannot hit a lefty pitcher, then he doesn’t belong in the Major Leagues at all.

Then Riggleman, in his post-game comments, regurgitates his patented coach-speak about how he is proud of his guys who are veteran professional hitters and who give a lot of effort.

Jim, baby, they are not professional hitters, they are not giving enough effort and the reason you have so many “veterans” is they are over-the-hill rejects that other teams did not want. I am talking about Jerry Hairston, Alex Cora, Matt Stairs and, yes, Ivan Rodriguez. Now that Ryan Zimmerman is out for another two months or more, I say cut the old guys loose -- starting with Riggleman – and call up anyone from the minor leagues under 25 to replace them.

By the way, Riggleman, as a Major League manager now with his third team, has a career record of 636 wins and 801 losses. The evidence speaks for itself than any day in the future he remains as manager, the National have a better-than-even chance of losing, no matter what the players do.
Posted by Ira