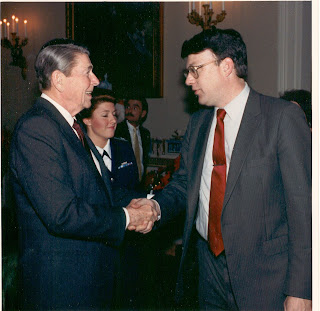 I will watch the Super Bowl this weekend and try to keep up with events in the Middle East. But I will otherwise keep the television off lest I become convulsed with nausea at the national outpouring of treacle over the 100th birthday of Ronald Reagan.

I was a reporter who had the privilege of covering the White House for four and a half years, encompassing the middle of his tenure. I believe I was as fair in my coverage of him as I was in coverage of anything else I reported. And I stood on a street corner to pay my respects as his hearse rolled through the streets of the capital city.

This recollection is merely a futile attempt to command the tide to stop, to speak up against the worship by weak, ignorant people of a saint who did what he could to drown this country in debt, death and decline. In my view, both close up and in retrospect, Reagan was a tool of an ideology that while it did not wreck America, certainly hampered the social, economic and international standing of this great country.

His life story was one of denial – the result of having to mediate between his mother and a drunken father; getting his first professional break by “re-creating” (that is, making things up) broadcasts of far-away baseball games; acting in movies whose lines or plots he would later in life believe to have been true; and moving from a union leader to a shill for one of the worst (or best, if you will) icons of runaway capitalism, General Electric.

Every president makes mistakes of policy, but the lasting damage Reagan did to this country was to advance and repeat the shibboleth that government is your enemy.

He would often tell adoring audiences – almost always all-white and middle-aged –“The nine most terrifying words in the English language are, “I’m from the government and I’m here to help.” (I am not sure he used that line when appearing before military audiences, which was his wont, because his handlers would never let him near an unfiltered crowd.)

First, let’s review some of the greatest hits of a president who some observer long ago aptly called an “amiable dunce.”

--Voodoo economics
--The Laffer Curve
--Ketchup is a vegetable
--Deficits don’t matter
--Evil empire
--We begin the bombing in five minutes
--Opposed sanctions against South Africa
--Opposed the Martin Luther King holiday as an economic loss to the country, signing it into law only after Congress passed it by a veto-proof majority.
--Opposed the original Voting Rights Acts, and originally opposed its extension in 1982, signing it into law and taking credit for it only after Congress passed it by a veto-proof majority.
--Sent Marines to Lebanon where they took the low ground at the airport and lost 220 of them in a suicide bombing, the Corps greatest single-day loss of life since Iwo Jima.
--Three days later invaded Grenada, a campaign in which more than half the U.S. deaths were from friendly fire and in which more medals were handed out than there were troops on the ground.
--Presided over the most corrupt administration in recent history, with at least 100 appointees tarnished by conflicts of interest, indictments, convictions or firings.
--Five years after vowing “we will never negotiate with terrorists” authorized the trade of arms for hostages, and then sent his hapless vice president out to explain to the public, “Mistakes were made.”

Ronald Reagan believed the government should stay out of people’s lives, except when they were in the bedroom, and he prevented family planning aid from being offered to developing countries that we preferred to keep poor and thus more susceptible to communist influences.

He glorified family values though he was a divorcee and spent six or seven years on the dating market as one of Hollywood’s most eligible bachelors. I remember the day he met his 2-year-old grandson for the first time -- and called him by the wrong name. His elder son, the adopted one, was sexually molested at camp as a child, but did his father ever know? He had no use for his younger son or younger daughter, who opposed him on most major issues, and when there was a family portrait at Christmas, it looked like a hostage photograph.

He was a union president, but he hated workers, using his presidency to smash organized labor. He was a liberal Democrat but “named names” that put former colleagues on the Hollywood black list.

His hatred of government began only when General Electric started paying him to host “Death Valley Days” and then to propagate the company’s capitalism-uber-alles in lectures to GE employees all over the country. To paraphrase what he later said about the Panama Canal, They bought him, they built him and they were going to keep him. He became a conservative because during World War II, when all the other leading men in Hollywood were actually away at war, he got better and better movie parts, earned more money and had to pay taxes at a historically high level.

As a political performer, Reagan read a script great, keeping you on the edge of your seat waiting from him to drift into a miasma of mental mulch, only to recover in time and complete the sentence with a punch – though the sentences were usually false pieties that rarely made any policy sense.

He told great stories, but the best ones were not true, such as the one about him helping liberate concentration camps, or the one about the heroic Air Force pilot who, after his plane was brought down by enemy fire, comforted a wounded crew member by telling him, “That’s all right, son, we’ll ride this one down together,” leaving listeners wondering which one of the dead airmen related the story in the first place.

Everyone said he was personally warm, but only to those he thought could help him. To the extent that he was even made available to the press or public – which was hardly – I was in his face constantly as part of the press pool. After four and a half years, I am utterly convinced he had no idea who I was, or at least could not attach my name to my face. I bring this up because almost every other politician I ever met had as a chief political asset that very skill. In short, his only political skills were a smile and a shoeshine.

He appealed to the worst in Americans and was venerated because he tapped into the fantasies of white working people who wanted to follow him backwards into some nonexistent golden age when morning in America meant, racism, poverty, war and being what that unctuous Chris Mathews calls “regular people.”

His skill was in adopting simplistic slogans by which he governed. He was, indeed, the godfather of the hate-mongering vermin who now operate the Tea and Republican Parties in his name. He might even be appalled.

So upon the centennial of his birth, all I can say is that Abraham Lincoln was wrong. You can fool all of the people all of the time. The only reason his acolytes want to memorialize him as the greatest ever is because they know he was the biggest goddamn phony ever to rise to the presidency and they are afraid history will judge him so.