We were minding our own Saturday evening business -- she in her ‘kerchief, and I in my cap --when the most horrible mind-altering rhythmic screeching occurred from two places in the part of the house that was built a year ago.

It was the built-in electric smoke/fire detectors. I looked and there was no fire. I took the battery out of the one I could reach and it did no good. The other one, in the 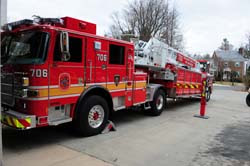 bedroom, is about 20 feet up the wall, near the cathedral windows two stories high.

I called the nonemergency number and a fire truck came -- without siren. They looked at the bedroom device and said, "How are we gonna get up that high?"

I felt like saying, "You're the fucking fire department-- get a ladder!" Instead, I wound up getting my super big extension ladder from the shed and hauling it into the bedroom. It was the ladder the contractor-from-hell provided after losing my previous shorter ladder, albeit one that I could handle and actually climb.

So I have emailed both the architect and contractor hoping there is a chance they can figure out what malfunctioned, move the detector that never should have passed code because it was unreachable, and then repaint.

The chance is probably spelled f-a-t
Posted by Ira