Stick a Fork in Him, He’s Dunn 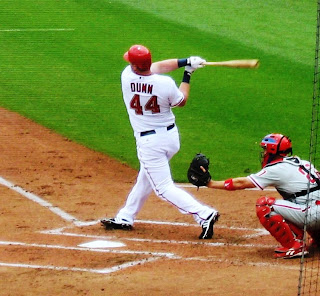 Adam Dunn, the likeable Gargantuan who can’t play left field or first base at any standard of Major League professionalism, wants to stay with the Nationals and the Nationals profess to want to keep him and his average of about 40 homeruns a year and 100 runs batted in.

But as the trade deadline approaches, I say trade him – IF the Nats can get a good return; namely, two or three front-line players who are not great but who hit decently, run decently and field decently. The team needs consistency throughout a lineup whose only real hitters are Dunn, Ryan Zimmerman and Josh Willingham.

Why would you give up a prodigious homerun hitter who is also popular? Because homeruns are overrated.

When I grew up with the first Senators and then the second Senators, every year it seemed they would have a guy or two who led the league in homeruns. And they finished dead last.

Despite the homers and the elevated batting average, Dunn is simply not a good hitter. He cannot readily adapt to the severe shift defenses put on him; he is handcuffed by every other lefthander’s dream – the low inside pitch; he does not often get good pitches to hit, especially with men on base, but he still swings at crap. Sometimes ball falls in or leaves the ballpark.

But careerwise, he hits 100 points better with the bases loaded than with men in scoring position and two out. The meaning of that is that when a pitcher has to face Dunn, he can hit. But when a pitcher does not have to throw fastballs over the plate, Dunn is a helpless giant.

The final argument for trading him – IF the price is right – is that since the Reds decided not to re-sign Dunn after 2008, the team has won 131 games and lost 126, for a percentage of .510, compared to the Nationals record since obtaining Dunn – 99 wins and 157 losses for a .384 winning percentage. You don’t have to be Professor Irwin Corey to see that Dunn not only makes no difference, he may be a detriment.