Some of Her Best Friends 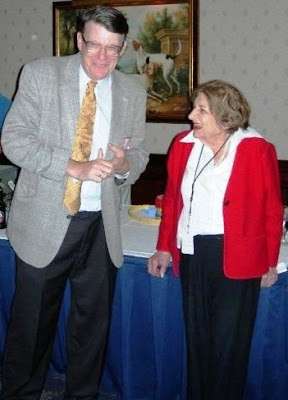 The brilliance of “Kids Say the Darndest Things,” the early television featured created by Art Linkletter who died last week, was that children have brains enough to view the world in an organized fashion but have not yet developed the inhibitions to keep them from saying those darndest things.

The same is true of old people. The inhibitions are lost, either through brain chemistry, or just the feeling, “What have I got to lose by saying what’s on my mind?” Believe me, I am in that latter category while still too young for Social Security.

Unfortunately, my former colleague, mentor and good friend Helen Thomas never lost her fastball, but she lost her inhibitions. She did the only thing possible today after making horrendously ugly remarks. She retired instantly after 67 years reporting on Washington – the past 49 from the White House.

She had a serious health incident in recent years but, as her friends predicted, Helen bounced back as strong and acid as vinegar. I am afraid, now that she has to stop doing the only thing she has ever done, that there may not be much for her to look forward to. My advice is for her to spend her days writing, even if only for relatives and posterity. She already has said too much for public consumption.

It didn’t take long during my tenure at the White House reporting next to her to figure out that non-news-related conversations about the Middle East were not going to end well. So I never raised it. Helen had a legitimate reason, as an Arab-American and as a citizen with a mind, to fault Israel and praise the wicked.

But Helen’s recent remarks betrayed her keen sense of history. She made the biggest mistake that every closet anti-Semite eventually makes – failing to distinguish between Zionism and Judaism. She failed to notice, among other things, that a majority of Israelis are African, Arab or Asian.

Helen Thomas is a great American, but if she wanted to go “home,” she could emigrate to Lebanon quite easily. But for all the Jewish people she worked with and knew, and presumably liked, they can’t go home to Germany or Poland because there are no Jews left for them to mingle with. We all know why Israel exists, except for Helen.

I have said I will not pile on someone I otherwise admire, but the irony is that Arab support of Hitler helped make possible the state of things they now abhor.

If ever there was a living example of the Greek concept of tragic irony, it is Helen and her inborn fatal flaw -- unable to be hidden for more than 89 years and unable to have been overcome by some of the Jews who were her best friends.