DVD it to Beaver

I don’t specifically remember watching “Leave it to Beaver” but I know I did, and I think I was 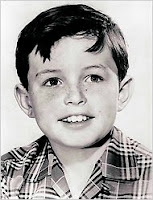 uncomfortable about it, maybe because the Beav and I were the same age, and not too different in looks and body slouch. And, unlike “Make Room for Daddy” or some of the1950s variety show sketches, the show presented a version of life that I never experienced – but, like everyone else, wished they had.

(OK, I’m sure Ward and June were Republicans. And how come the epitome of 1950s dad-hood, i.e, Ward Cleaver and Jim Anderson, sold insurance?)

Anyway, as life unfolded and I have seen most episodes in rerun, it is clear that it was the best family-oriented show of its time, and maybe all time. As I watch reruns I am surprised that as with Twain and other satirists, there were two levels of understanding – the one for the Beav and Wally and one for the adults.

The comedy itself was not in-your -face but based on fairly clever realistic plot lines and smart writing.

The New York Times on Sunday has a good retrospective tied to the boxed-set release of all 234 episodes.

I’ll catch them on Nick at Nite, but the article itself is worth looking at, and if you really think about it, as much fun as was made of the white-bread nature of the Cleavers and their community, it was at least the best-written and acted of the sitcom genre.
Posted by Ira