“Turn the Legal System Over to Waylon” 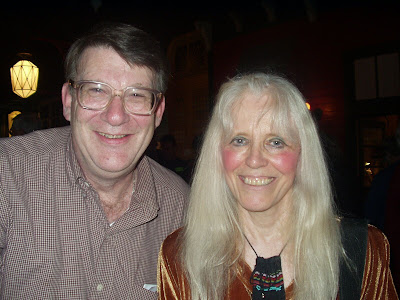 A few years ago I paid big bucks, oh maybe $80, for the right to attend a weekend of folk music with rights to go to after-performance parties. It was actually one of my more memorable concert experiences, getting my picture taken with Carolyn Hester and getting to meet the one of the Limeliters (“Which one are you,” I asked. “The one in the middle,” he cracked.)

I also got to meet and talk some court cases with Steve Trott, who was a justice of the 9th U.S. Circuit Court of Appeals, a right-wing jurist appointed by Ronald Reagan, but more significant, he was a member of the original “Highwaymen.”

I am pretty sure I saw them in concert in 1962 but the significance of that event 48 years ago was that it was one of MY first dates. I invited and took a classmate who I thought was pretty cute. And so did a lot of other guys, one of whom eventually married her, and they produced a daughter who now works in the same organization I do.

I am rambling here, but memories do flood back when one reads an obituary of someone who had even a small effect on your life. And that “The Highwaymen” -- not because of my date so much as the beginning of my love affair with folk music, both commercial and "ethnic."

The group’s lead singer, David Fisher, died the other day, and the LA Times memorialized him quite nicely, especially dredging up an old quote from Judge Trott, referenced in the title of this entry, and linking to a 2007 performance of “Michael.”