The National Pastime ... for Morons

Pace Be Unto You

On Oct. 6, 2006, in one of the first postings I made to this blog, I went off on Joe Morgan, the goddamn dumbest baseball announcer I have ever heard. Why he has been allowed to spend 20 years in the booth on Sunday night baseball by ESPN is one of those mysteries I will take to the grave.

Tonight, Joe Moron, commenting on criticism of the game for taking too long to play, said, and this is a rough quote (meaning from memory): "It isn't the length of the game, it's the pace of the game. I look at how long it takes for the catcher to talk to the pitcher."

I will wait till his mouth freezes over before I find out the difference between "pace" and elapsed time.

For non-baseball student, and fie on thee, there are many elements that cause games to take too long to finish. They all have to do with pace (those portions that are not imposed on the game by TV commercials) such as the batter fidgeting between pitches, the pitcher fidgeting between pitches, picky hitters who refuse to swing at anything but a perfect pitch, catchers going to the mound to consult with the pitcher, too many practice swings, and on and on.

Yogi Berra was ironic when he said of Mamma Leone's restaurant in New York, no one goes anymore; it's too crowded.

When Joe Moron says it isn't the length of the game but the pace that bothers him, he isn't being ironic. He is being idiotic.

If the Nationals don't bench or fine first baseman Adam Dunn for his baserunning boner today, then there is no reason to believe they are serious about ever winning. Dunn is 6-foot-7 and weighs 275 pounds. In the 167 games he has played for the Nats before today, he has never used his football brawn to score a run by flattening a catcher. Mostly that's because the Nats don't score that often and because Dunn's specialty is home runs, which require only a leisurely trot around the bases to score. 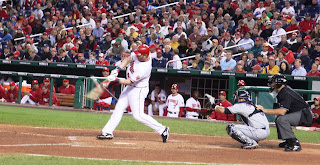 n over the Mets catcher right on his Rod Barajas. However, after his next at-bat, while standing on third with one out and the right field catching a fly ball, Dunn tried to score, but loped home standing up to find the same Barajas holding the ball and tagging him out.

It doesn't matter whether you are Paul Bunyan or Paul Reubens, when you try to score from third when a play is being made on you, you slide!
Posted by Ira