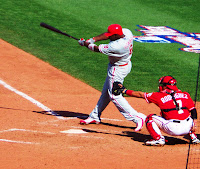 I went to Opening Day of the baseball season in Washington today and found that my love of the sport is diminishing -- at least my love of attending Major League games.

For one thing, there is no chance to relax at the ballpark anymore because every inch of every surface -- from the outfield walls, to the electronic displays of patriotism, promotion and advertising, to the scoreboard, to the airwaves themselves that are roiled by constant noise from the p.a. system -- is dedicated to selling you something.

Another thing I can barely stomach anymore is the selling by Major League Baseball of fake patriotism through the veneration of anyone connected with the military.

I was going blog about my impressions of the game, but when I got home I did my cursory check of the news online and found a disturbing video of how such patriots deal with my kind of patriots -- journalists (not to mention civilians and children.)

The video speaks for itself, and I recommend it for anyone who still has any illusions about the conduct of American foreign policy in 2007.