Issa That a Pistol in Your Pocket?

The science that has given America the best health care in the world – at least according to myopic Republican politicians – is grounded in the unique system by which the federal government awards research grants for the independent study of important medical issues. Most of the grants are issued by the unassailable National Institutes of Health (unassailable because I work for it as a contractor), and the value of those grants are decided upon by panels of experts in the field. Partisan politics does not play a role.

But since this is taxpayers’ money, every once in a while a cretinous Congressman thinks he can make political hay by arousing the public over grants that have to do with one subject and one subject only. Sex.

Several years ago, the House came within one vote of canceling grants because the eponymous Rep. Jeff Flake of Arizona didn’t like studying the prostitutes who are largely responsible for the African AIDS epidemic that has killed millions of black people and ruined the economies of half a continent.

Now, another yahoo who should know better got the House to pass, without debate and without a vote, cancellation of several other AIDS studies. 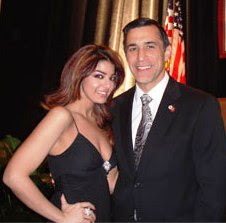 This living example of the need to for further brain research is Rep. Darrell Issa, R-Calif. His amendment – which one hopes will be quietly dispatched by the Senate or a conference committee – high-handedly would cancel behavioral research studies on 1) the factors that put Thai prostitutes at special risk of HIV; (2) decreasing high-risk HIV behaviors among Russian alcoholics; and (3) an intervention program targeting HIV risk and alcohol use among Chinese prostitutes.

Why does Issa care? He cares because these three grants were brought to his attention by a news organization that was rooting around the tens of thousands of grants the NIH awards to find those having to do with sex. The news organization? The reputable Christian Broadcast Network, founded by the always reputable Pat Robertson.

I sure hope Issa or anyone in his family never gets AIDS, never has sex outside of marriage and never needs their lives saved by discoveries made through scientific inquiry.

Mr. Issa is the guy who made a fortune with the Viper car alarm system, and is literally the voice behind “Please step away from the car.”

While convicted only once, he has a very interesting history regarding the use of cars, as explained on Wikipedia.

In 1971, Issa allegedly stole a Dodge sedan from an Army post near Pittsburgh. The allegation was made by a retired Army sergeant, and published in a 1998 newspaper article. Issa denied the allegation. No charges were filed.

In 1972, Issa and his brother allegedly stole a red Maserati sports car from a car dealership in Cleveland. He and his brother were indicted for car theft, but the case was dropped.

Also in 1972, Issa was convicted in Michigan for possession of an unregistered gun. He received three months probation and paid a $204 fine.

A day after a court order was issued, giving Issa control of automotive alarm company A.C. Custom over an unpaid $60,000 debt, Issa allegedly carried a cardboard box containing a handgun into the office of A.C. Custom executive, Jack Frantz, and told Frantz he was fired. In a 1998 newspaper article, Frantz said Issa had invited him to hold the gun and claimed extensive knowledge of guns and explosives from his Army service. In response, Issa said, "Shots were never fired. ... I don't recall having a gun. I really don't. I don't think I ever pulled a gun on anyone in my life.”

The views expressed in this post are mine and not those of the National Institutes of Health or any other component of the U.S. government.