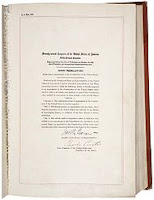 Today being the 75th anniversary of repeal of Prohibition, I got to thinking about the Constitution. I thought of it earlier, but, well, celebrating repeal kind of delayed this elucidation.

The Constitution is a fabulous document, no other except the Bible creating so much controversy -- or laughter.

After a lifetime spent fighting for the oppressed, for human rights and, by God, for women, she is now on the verge of attaining the job title of “secretary.” And being paid less than any other man in the Obama Cabinet.

The reason for the pay cut is that she cannot hold the office of Secretary of State because of a sneaky little Constitutional provision known as the “emoluments clause.”

No Senator or Representative shall, during the Time for which he was elected, be appointed to any civil Office under the Authority of the United States, which shall have been created, or the Emoluments whereof shall have have been encreased during such time. . . . -- Article I, Section 6, Clause 2

This is the clause that prohibits holding a federal office for which you voted an increase in salary for. Hillary voted to raise Cabinet salaries. The only way out is to pay her the salary that existed before the vote. It has been done before and is pretty sneaky, yet the courts have not wanted to enforce the letter of this provision.
Posted by Ira