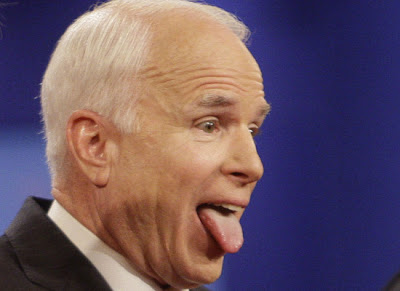 This is how bad John McCain was on Sunday. His incredible other-wordly responses – which I will kindly call factual inexactitudes made even the Fox News interviewer, Chris Wallace, act like a journalist and ask tough follow-up questions.

Before he went on the road in to declare he was campaigning on behalf of "Joe the Plumber and Rose the Teacher and Phil the Bricklayer and Wendy the Waitress,” (why is he giving people Mafia names?) he bounced around the issues like they were padding in a cell during his Fox interview:

Except in 2000, he has never been the underdog at any time. Certainly not in in any of his two House races or three Senate races, including the primaries preceding them, and in 2000 he was only the underdog after Bush slimed him in South Carolina the way the same Bush aides are sliming Barack Obama – on McCain’s behalf.

“Senator Obama raised $150 million in -- I understand, during the month of September, completely breaking whatever idea we had after Watergate to keep the costs and spending on campaigns under control -- first time, first time since the Watergate scandal. And I can tell you this, that has unleashed now in presidential campaigns a new flood of spending that will then cause a scandal, and then we will fix it again.”

The factual predicate for this bit of flailing at nonexistent demons is that Obama has raised $600 million since he entered the race, half of it for the general election, while McCain is limited to the $84 million guaranteed to candidates from the taxpayers. Obama broke a promise to abide by public funding when it was clear that he would need every penny he would get to beat the Republican attack machine. Disingenuine of Obama? Yes, but hardly on the level of Watergate.

McCain would have you believe that the cost of Richard Nixon’s 1972 campaign led to “Watergate reforms.” The issue was not amounts but the fact that contributions were secret. They are now public record. And to McCain’s chagrin, when you can raise $600 million as Obama has done, that fact alone might attest to your popularity – and your ability to deal with the federal budget. OK, just kidding on that last one.

The ironies on McCain’s whining are rich. First of all, the McCain-Feingold law is now restricting McCain’s ability to raise and spend money. Second of all, it wasn’t so much that McCain “chose” to take public funding. He had to because of a shady, potentially illegal, deal he made last year when his campaign was broke. He went to a Virginia bank – in the part of of the commonwealth he says is not “the real ” – and was turned down for a loan. He offered to collateralize and emergency loan with a life insurance policy. The bank looked at his and history of cancer and declined. Then, he got the loan by using as collateral the future federal funding he would receive if he became the nominee. So, McCain, has to take the federal money.

“Where are we in , where a candidate for president comes to a person’s driveway, he asks him a question, doesn’t like the answer, and all of a sudden he’s savaged by the candidate’s people -- I mean, savaged by them?”

This reference to Joe the Plumber is bizarre because Obama did not go to the guy’s driveway, the guy went up to Obama to make his point about taxes – which was completely inaccurate but nevertheless JTP’s right. It reference followed three days of accusing Obama of invading the poor guy’s privacy. Yet it was McCain who brought JTP up in the last debate 21 times and McCain who raised to prominence a guy who had to delay campaigning with him because he was in doing the celebrity interview circuit!

Nobody “savaged” JTP. Joe the Senator (Biden) asked the next day how many plumbers earn over $250,000 a year, and the Obama campaign pointed out that even if wildly successful beyond all expectation, JTP might pay about $300 a year more in taxes. Privacy shmivacy! What you have is McCain adopting Republican tactics that go back to Richard Nixon’s 1946 campaign, except he isn’t very good at it.

Oh, and it was reporters, not Obama, who found out Joe’s name isn’t Joe, that Joe is not a licensed plumber and that Joe owed the state of Ohio about $1,300 in back taxes, making him a perfect test subject for the McCain Kool-Aid.

Asked about his newest tack, that Obama is a “socialist,” McCain said:

“I think his plans are redistribution of the wealth. He said it himself, “We need to spread the wealth around.” Now, that’s one of... the tenets of socialism. But it’s more the liberal left, which he’s always been on. He’s always been in the left lane of American politics.”

Whoa, Johnny boy! Socialism is the state controlling the means of production, and Obama is far from a socialist. When pressed by Wallace, note that McCain throttled back to “it’s the more liberal left.” Socialism is what you get when you vote for the federal government bailing out Wall Street and taking ownership of the banks. Which McCain did. Socialism is the fundamental tenet of American crony capitalism where the state lowers your risk but lets you keep the profits.

Why does McCain trot out “socialism?” Because the had “socialism” as part of its formal name, as did the Nazis. But socialism is the prevailing economy theory behind the economies of the rest of the Western world, and it works. Doctors, invoking “socialized” medicine are the reason 45 million people in are uninsured and the reason costs are so high.

McCain would have the flag-waving, gun-cuddling, God-fearing yokels who form his lessening base believe that has never been about redistributing wealth. Every tax law, every spending bill, every regulation government has ever undertaken has had as its purpose, or its effec,t economically benefiting one group of people at the expense of others. It is called politics.

“And I don’t care about Mr. Ayers … and his wife, who was on the top 10 most wanted list. I care about everybody knowing the relationship between the two of them. That’s legitimate.”

If he doesn’t care, why has the last month of his campaign for exalted office by carping about “an old washed up terrorist.” Why is his campaign phoning people with tape recorded messages that say:

“You need to know that Barack Obama has worked closely with domestic terrorist Bill Ayres, whose organization bombed the U.S. Capitol, the Pentagon, a judge’s home and killed Americans.”

The facts are that Ayers and Obama never “worked closely”with each other. They served on legitimate nonprofit boards, one of which was created by and funded by the family of Ronald Reagan’s best friend, and included Republicans on them. Says McCain, the issue isn’t that Obama has met Ayers and taken a small contribution from him when he first ran for state Senate, it is that “we need to know the full extent of that relationship.”

We know the full extent. Period. He keeps asking, “Who is the real Obama.” If anyone doesn’t know everything there is to know about Obama, he or she has not been paying attention. We know a lot more about Obama than we know what happened to McCain’s brain during his five and a half years in prison. Which may be why in a Freudian slip of frightening magnitude, he recently addressed an audience as, “My fellow prisoners.”

“These (robo calls) are legitimate and truthful, and they are far different than the phone calls that were made about my family and about certain aspects that -- things that this is -- this is dramatically different, and either you haven’t -- didn’t see those things in 2000... or you don’t know the difference between that and what is a legitimate issue, and that is Senator Obama being truthful with the American people.”

Eight years ago, denouncing the Bush smear tactics against him McCain said, “I promise you, I have never and will never have anything to do with that kind of political tactic.” Now, McCain is using the same guy who smeared him to smear Obama with robo calls, so much so that Republican Sen. Susan Collins demanded he stop flooding her state with them.

The only thing McCain ought to be doing from now until Election Day is restraining himself and his running mate so that at least he serves out his remaining time on Earth with a shred of dignity.