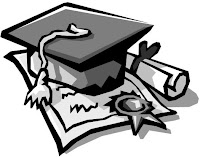 I met a woman the other day who had been in one of the undergraduate journalism courses I taught at night during the ‘80s. I recalled her vaguely as a solid worker who probably got a B, maybe even one of the rare A’s I gave, but who was otherwise little distinguished.
She admitted to having been a little shy, and also, as we reminisced, to finding out later in the real world of journalism that all the nitpicky little crap I made students learn came in fairly handy to her.

It was a pleasant, if slightly awkward, conversation, and as she looked around for the right stories to tell me or the right thing to say without becoming embarrassing, she stopped in midsentence and simply said, “Thank you.”

All the real educators reading this probably already knew that those two words constitute the highest praise possible and validate the passion you brought to the task.
Posted by Ira